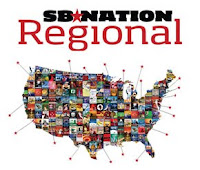 I mentioned this on the old Eye of a Panther blog, but for those of you who found the site elsewhere, I'll make this brief announcement again.
SB Nation is creating a regional Pittsburgh blog site.  The site will include coverage for all of the area's sports teams.  Yours truly has been asked to serve as the contributor for Pitt football and basketball.  The site will launch on Monday, June 21st and I'll provide more information, including the site link, at that time.  In the meantime, you can check out the entire list of all of the regional sites as well as their launch dates.  Some of the sites are now up and you can check them out to get an idea of what the Pittsburgh site will look like.

As part of the site's launch, SB Nation will be hosting a meetup that Monday the 21st from 6:00 p.m. - 8:00 p.m. at the Carson City Saloon over on the south side of Pittsburgh (1401 E. Carson Street).  I believe several of the site's writers (including myself) will try to be there.  Much more importantly is that there will be food and drink specials as well as some free stuff/giveaways.
Stop by if you can.  Here's a link with details and also to RSVP.