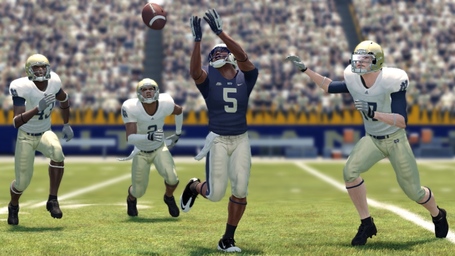 This past week, Greg ran our official NCAA '13 simulation and came up with 7-6 for Pitt. CBS Sports ran an a simulation as well and Pitt finished atop the Big East.

The Panthers' complete record wasn't disclosed, but they did finish 5-2 in the conference in a tie for first with several other teams including Cincinnati, Rutgers, and Louiisville. Pitt lost the tiebreaker to the Bearcats, though, who went on to the BCS.

Cincinnati went on to play Virginia Tech in the Orange Bowl, losing 36-26. They were the only Big East team to finish the season ranked, coming in at No. 25. Another somewhat surprising development was that Temple went to a bowl, finishing 7-6.

I promise, the season simulations are over here. Well, unless I find one with Pitt going to the BCS.