Share All sharing options for: Pitt fails with 2013 Blue-Gold effort

I'm a big fan of most things Pitt has done over the years in regards to its football program. The athletics department has made it a priority to get Notre Dame on the schedule. There's been the renewal of the Pitt-Penn State game. Paul Chryst was a solid hire in my opinion. There was the huge move to the ACC. And the events surrounding game days are family friendly with inexpensive tickets. But when the school fails miserably at something, I don't think they're beyond criticism.

And the Blue-Gold game this year is one of those cases.

In case you missed it, the game was announced to be played on a Friday night on April 12th at Bethel Park High School. The allure of wanting to play the game at a local high school is understood. It strengthens ties with not only local neighborhoods, but with high school coaches and even prospective recruits. But the fact is that the game has no business being played at a high school stadium ... not if the goal is to promote an air of big time college athletics.

Ah, big time athletics. That's really what Pitt has tried to sell us with the move to the ACC. At least that's the impression I got when my glossy oversized souvenir ticket came in the mail last year, touting the achievements of the ACC's schools. It's a step up in football and will bring increased revenue. The program plays its games in an NFL facility. So why would you pass on the opportunity to play your annual scrimmage at Heinz Field for a stadium that seats a few thousand people? Even this kid wants to go to Heinz Field ... seriously, just ask him: 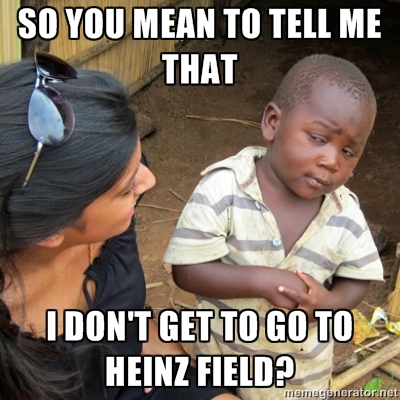 Right around this time, my educated guess is that you're silently pointing out that Heinz Field has never drawn big crowds for the game. That may be true, but part of it's been due to average to poor weather. On top of that, I think the university could do more to draw fans ... I previously outlined some ideas here. The game has always been treated a bit like a second-class citizen and there's not been a lot of priority placed on making it a big deal.

But the bottom line is that if you're sick of terrible crowds, do something about it. Give away free tickets to the regular season, free merchandise - heck, anything to get people through the turnstiles. Know what yinzers love more than anything? Fireworks. Get on the phone with Zambelli and make it happen. Will all this cost money? Sure it will. But you're about to come into a windfall in the ACC, so that's of little concern. Dump $50K or even $100K into the event - trust me, over the long haul it will be worth it.

And if the idea of the whole community relations thing is that appealing, then do something else at the high schools. Pick one high school each year to hold a practice at and open it to the public. Don't want your practices public? Heck, I don't know - do a camp day with players interacting with the public. There are plenty of things you can do at the high schools other than the Blue-Gold game which, if done correctly, can be a huge attraction.

Beyond all that, though, the bigger problem is the Friday night idea. I. Just. Don't. Get. It.

Okay, so high school games are played on Friday nights ... and people make it to those, right? Well, yes. And in western Pennsylvania, they show up in droves. But the majority of those crowds are already in the neighborhood and aren't forced to travel. Plus, you've got students, friends of players, relatives, etc. It's really not the same thing as trying to draw people for a college scrimmage.

Imagine the traffic nightmare of trying to get to a game after rush hour. Unless you live close by, forget trying to go home from work first. For someone like me, who lives an hour away from the stadium without traffic, there's no chance I'll make it to the game ... just not worth it.

Chas over at Pitt Blather theorizes that it could possibly be due to Pitt hoping to get on TV. That's a reasonable hypothesis, but if that's the true reason, I still think it's a horrible idea. So the Panthers get some eyeballs on a Friday night to watch their scrimmage. The idea would be that it would bring some great exposure, but how would it look if the weather's bad and there's 2,000 people in the stands? What was meant to be a positive turns into a negative. Real quick.

Even in a best case scenario of Pitt drawing a great crowd it still doesn't come across well. Imagine you're a big time recruit - you watch Pitt scrimmage at a nearby high school while schools like Penn State are drawing 60K. Yeah, good luck with that.

And, by the way, if you don't think Pitt looks like a joke for this ... think again (this from a list of last year's spring game attendances):

Pitt- 4,617 Damn near sold out the high school stadium where the game was held.

Well, yeah. And we're proud of it.

Maybe there's some logical reason why the game has to be played at a high school ... why it has to be on a Friday. But until I hear a plausible explanation, I won't be convinced this is a good idea. Pitt is in the ACC now and the thought is that we're a big time program. As I said last year, it's time to act like it.