Hello, This Is Me

Share All sharing options for: Hello, This Is Me 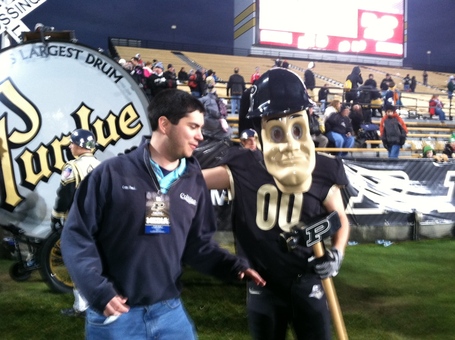 My name is Adam. I'm the new ACC sports contributor here at Cardiac Hill, and I inserted this candid photo of myself being photobombed by Purdue Pete to try and curry some favor with you all before telling you that I just graduated Penn State.

Did it work? No? OK, well take your shots. But don't bring the weak sauce "JoePa was afraid to play us," stuff in here. I get enough conspiracy theories from my own kind.

The reason I'm here, though, is to help a great group of bloggers take you through Pitt's first season in the ACC. I've worked with Anson and Pat for years at SB Nation Pittsburgh. I was in a band with Mike, and I've enjoyed the others' work here and during their previous stops in the Panther blogosphere. From that I've learned that Pitt, while certainly not blessed with teams that avoid choking excel in sports, has a fantastic site here devoted to them. So when Anson asked me to jump on board, I was pretty thrilled.

In addition to SBNP, my previous stops include SB Nation's own Black Shoe Diaries, The Daily Collegian, CBS Sports and the Tampa Tribune. I'm currently the Penn State beat writer for Pittsburgh Sports Report and a sports freelancer for the Pittsburgh Tribune-Review.

Here, though, I'll be focused on bringing you news and notes from around Pitt's new conference. Hopefully we'll all learn a little in the process.