Share All sharing options for: HI! MY NAME IS... 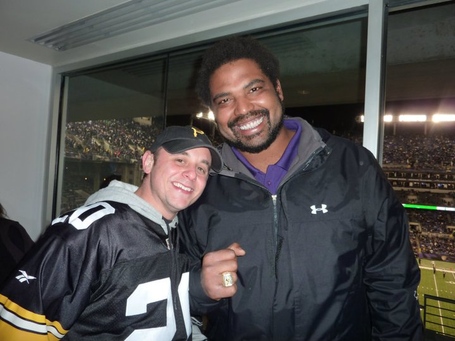 There are not a lot of Pitt blogs out there and even less fans that I can talk to about the Panthers living out in Bucks County, PA. When I was bored one day several years ago, I decided to look on the old interwebs to find people that were as delusional and passionate about Pitt football and basketball as I have been since I was shorter than I am now (I’m 5’2 on a good day).

There are only so many times I can talk to my childhood friends Steve, Billy, Chris, and my brother Eric about why Jason Maile was such a great player or why Tyre Young was going to be the cornerstone of the Panthers’ defense. It was here that I found people like Chris Peak, Chris Dokish, the Pitt Blather blog and of course, Cardiac Hill. I enjoyed looking ahead to future recruits and reading different angles on games, players, and coaches.

With that, I decided to start my own blog hoping to share some of my own thoughts. It was fun and all, but with Cardiac Hill’s recent invitation to come aboard, I am going full bore over here. I am flattered and excited that Anson extended the invite and can’t wait to get started. With that, here's a little about me.

I have been a Pitt fan as long as I can remember. From the day my father took me to my first Pitt game and the Panthers held off a Rod Woodson-led Purdue team at the last minute, I was hooked. Growing up in Washington, PA I was a Little Prexie during my high school years. Despite my love for Pitt and acceptance to the school, I went up to Clarion University for five years, taking what some would call a redshirt. Part of the reason for picking Clarion was their strong communication department, which has served me well. While there, I still followed the Panthers as they transitioned from Walt Harris and Ralph Willard to Dave Wannstedt and Ben Howland.

Following school, I worked in New York City for a couple of years, left for Philadelphia, then continued my I-95 tour to DC. Recently, I have moved back up to Philly to continue my advertising career.

Like all Pitt fans, I've seen some bad days.

There was the time I went to Charlottesville to witness Wanny attempt an onside kick to open the game and led to one of the longest three hours of my life. I also went to see a suddenly red-hot Todd Graham team that had just embarrassed USF at home give a lifeless performance at Rutgers. Then there was the time that I spent too much money to sit in Madison Square Garden to watch Pitt fall to BC in the Big East championship.

I have had season tickets on and off and have them this year, despite living five hours away. I usually make it back for 2-3 games per year if I’m lucky. I can’t wait for this season to see how Pitt does in the ACC and hope to be able to bring you some interesting perspectives on the Panthers.

Too many times, I have been that one Pitt fan in a different city watching the only TV that has the Pitt game on in the corner of a sports bar. I have been that kid that cried himself to sleep when Pitt lost to Vandy in the NCAA tourney thanks in part to a last second shot to force OT. I have been that guy who fell to his knees, alone in his apartment after the Villanova loss. I have been that guy that celebrated by himself after the 13-9 victory in Morgantown. I was also that same person who literally had a headache during the 4th quarter of the Notre Dame game and had to calm himself down so I didn’t have a stroke last season. I live and die a little too much with every game and probably shouldn’t, but that is who I am.

Lastly, I recently married a big Duke basketball fan. Our marriage will be tested, obviously.

You can follow me on Twitter @BrunoPittsburgh. One thing I can promise is that it will be passionate and fun. Let’s get on with the season and HAIL TO PITT!