Calculating expected wins for each team in the 2014 NCAA Tournament

You know your team has underachieved in the past, but have you ever wondered if there was a way to quantify your disappointment? Well now you can.

Share All sharing options for: Calculating expected wins for each team in the 2014 NCAA Tournament

As Pitt fans, we often spend late March discussing how well our Panthers should have done. Phrases like "I can't believe Pitt lost to Kent State/Butler/Marquette! They should have gone much further than that!" can be heard from all around town. As fans, our expectations for our teams are often high, sometimes unreasonably high. But how do we know exactly what a reasonable expectation is? In this case, we will let history be our guide.

In 1985, the NCAA Tournament moved to a 64 team format, making it so that all teams would have to play a possible six games to win the championship. Since then, the field has moved to 65 teams in 2001 and then to 68 teams in 2011. But, in all honesty, one cannot weigh a 16th seeded team's victory over another 16th seed equally to any of 15th seeded Florida Gulf Coast's victories last season. So for the purposes of this analysis, only the results from the Round of 64 on will be used.

The first step to determining a team's win expectancy is by ranking the field of potential opponents. Fortunately, the NCAA Tournament selection committee has already done this for us in their seeding process, so there is no purpose in reinventing the wheel.

With the seeding in place, the next step is to determine the number of victories each seed has had over the last 29 NCAA Tournaments. To do so, a list of all 116 participants (29 years * 4 participants per seed per year) per seed were compiled and their victories tallied (again, no Play-in/Opening Round games were included). These victories were then grouped by seed and divided by each seed's 116 participants, leaving us with an average. This metric will be considered our Tournament Wins Expectancy (TWE). 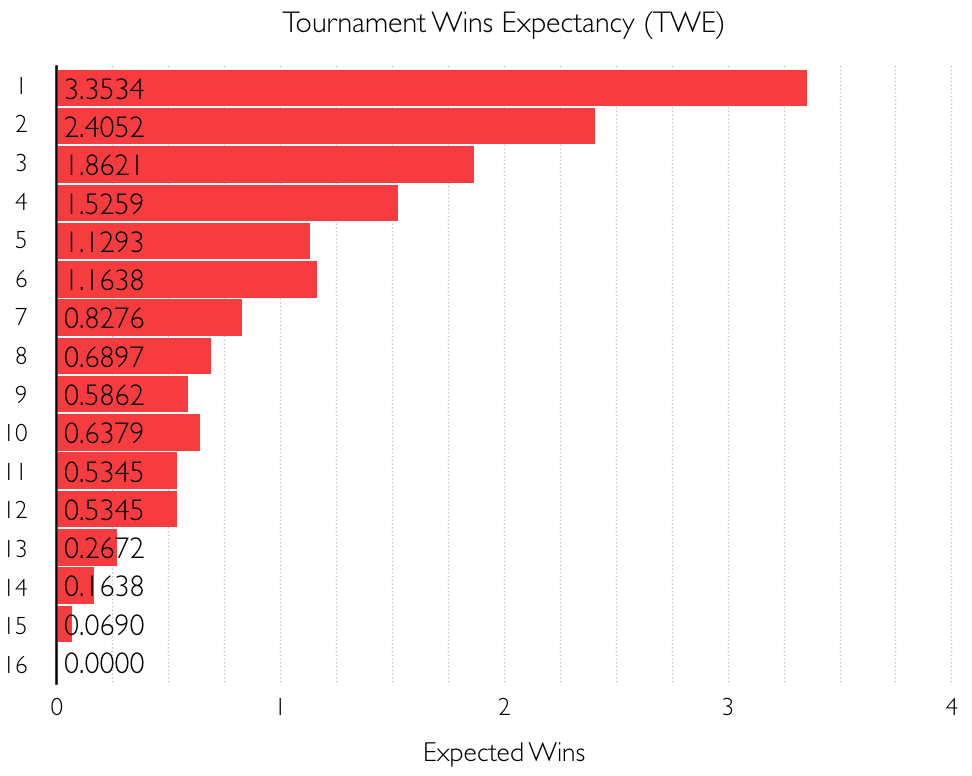 Now that we have determined TWE, we need to apply it to all 64 appearances in each of the last 29 NCAA Tournaments.

Let's use the 2011 Pitt team as an example. The Panthers were seeded 1st in that tournament and would have a corresponding TWE of 3.3534 for that appearance. However, since they lost to Butler in the Round of 32 (giving them only one win), Pitt would have a differential of -2.3534. This metric will be considered our "Wins Adjusted For Seed" (WAFS).

With the WAFS being calculated for every appearance, the data was then rolled up for each team. Below is a list of all 68 teams in the 2014 NCAA Tournament and their WAFS over the last five tournaments and in the 64 team era.

Unfortunately, this table is not sortable. But if it were, you would see one team sort to the bottom in three of the four categories. I'll let you all figure out who that team is, although I bet you have a pretty good idea.

Source of the data

All of this data was compiled using Wikipedia. Seriously, it was. When you have 40 hours of free time each week at work for over a month last summer, it is amazing what data you can accumulate and enter into a database for such purposes. Tomorrow, we will apply TWE and WAFS to NCAA Tournament coaches. If there is any other data you would like to see, let me know in the comments below.