Yesterday we had Part I of a series on Pitt's football attendance over the past 15 years by HokieMark from ACC blog, ACCFootballRx. As part of a post, he analyzed some football attendances for some of the new ACC schools, including Pitt. I thought it would be beneficial to have him write up his analysis here in a two-part series.

Pitt Panthers home football attendance is tough to figure. The best home attendance in the last 24 years was 2003 ... in the Big East ... in Heinz Field. The top 10 most-attended home opponents include New Hampshire and E. Tennessee St. The highest numbers all came off-campus. Weird enough for you?

To find out, let's once again review attendance trends, this time going all the way back to 1990, and including a polynomial curve fit for extra sensitivity.

Attendance vs. the stream of time 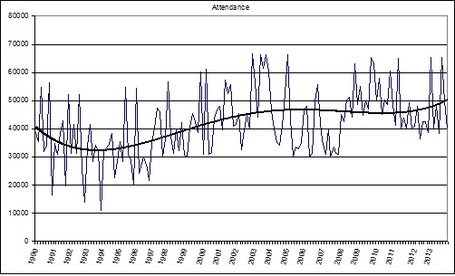 This chart shows some interesting factors at play. For one, attendance was definitely on the down-swing in the early 90's, but it started to pick up in the late 90's peaking around our mysterious year - 2003. It leveled off after that, but in recent years appears to be rising once more.

Looking at time as a factor got me thinking time of day - how big a factor has that been?

Attendance vs Time of Day

Apparently time of day is a pretty big factor in Pittsburgh. Noon kickoffs are simply not as well supported as games which start in the afternoon or evening (Are you paying attention, Mr. Pederson?).

In Part 1, we saw that some of the best attendance numbers came against some of the least appealing opponents (nothing against those teams, just saying), that got me thinking about another possibility - could it be the Panthers' own record which controls home attendance?

There are actually two factors here: number of wins and number of losses. Win percentage isn't good enough because at the beginning of the season one win or loss can have a huge effect on win%. 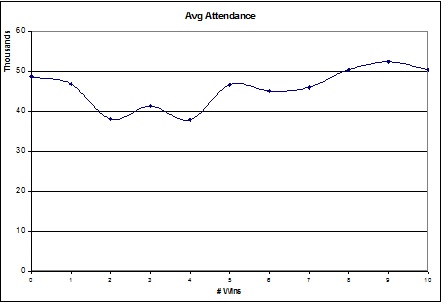 This curve is flatter than I expected, but it still tells us some things. For example, the fact that it starts so high (zero wins) is mainly due to pre-season expectations. It seems that Pitt fans support the first couple of games every year, win or tie.

As the season wears on additional wins don't do much for attendance until you get to at least five wins. At that point the team is chasing bowl-eligibility at a minimum. Crowds start to gain size as the win total tops seven, eight, and nine. Why does it drop off at ten, you may ask? It's been so long since a 10th win occurred at home (1976) that the team was playing in a smaller stadium... 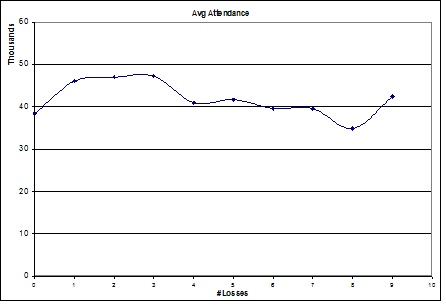 This chart tells a similar tale, only in reverse. At the beginning of the season crowds are good. One, two, even three losses doesn't seem to hurt attendance. However, once the team accumulates four or more losses, support begins to dry up as fans take a "wait 'til next year" approach.

It appears from all of this analysis that there were a number of factors which came together to create a "perfect storm" that season.

First, the Panthers were in an up-swing which got fans excited for the season opener (even if it was Kent State). Part of that was a special player - Larry Fitzgerald.

An upset of Texas A&M on the road in Week 4 got the fans fired up for a home game vs. Notre Dame. Even though the Panthers lost to the Irish, fans still turned out in droves to see Syracuse, Virginia Tech, and Miami at Heinz.

Yes, in 2003 the Panthers had a home schedule which included Notre Dame, Syracuse, Virginia Tech and Miami (and there was that road win against Texas A&M). That's one of the best schedules Pitt has had in a long time. Combine that with the fact that the games with Notre Dame, Virginia Tech and Miami were all played at night and you've got yourself an average of about 60,000 fans.

Pittsburgh fans love to see certain teams, but the opponent isn't always the determining factor, as we saw with some of those games against weaker opponents drawing good attendance. Like most fans, they also love to support their own team when it wins and there's no doubt that more wins generally leads to better attendance. Regarding times, noon kickoffs are unkind to Panthers, which are nocturnal creatures. The later the game, the better the attendance has generally been.

The stadium being off campus is often used as a reason Pitt doesn't draw well. However, based on a look at the last 15 years, that doesn't appear to be a real issue.