The run-pass option is here to stay.

When it first began to spread across the football landscape, defensive coaches everywhere, with some justification, cried fowl. They hated the way the offense was allowed to get away with sending linemen downfield while still somehow throwing the ball.

However, the best coaches in the game, as much as they may have hated defending the play, knew how deadly it could be, and they wanted to use it for themselves.

It's one reason why Nick Saban added Lane Kiffin to his staff, and it's also why yesterday, Pitt ran the play we're gonna talk about in this post.

Pat Narduzzi gained a lot of recognition at Michigan State for his tough, fundamentally sound defensive units, but today we're gonna take a look at the offensive side of the ball.

Pitt uses motion and shifts to disguise their intentions and keep the defense guessing until just before the center snaps it.

Pitt sends Scott Orndorf #83 from the right side of the line to the left, leaving all kinds of space to the wide side of the field and adding some extra muscle into the boundary. 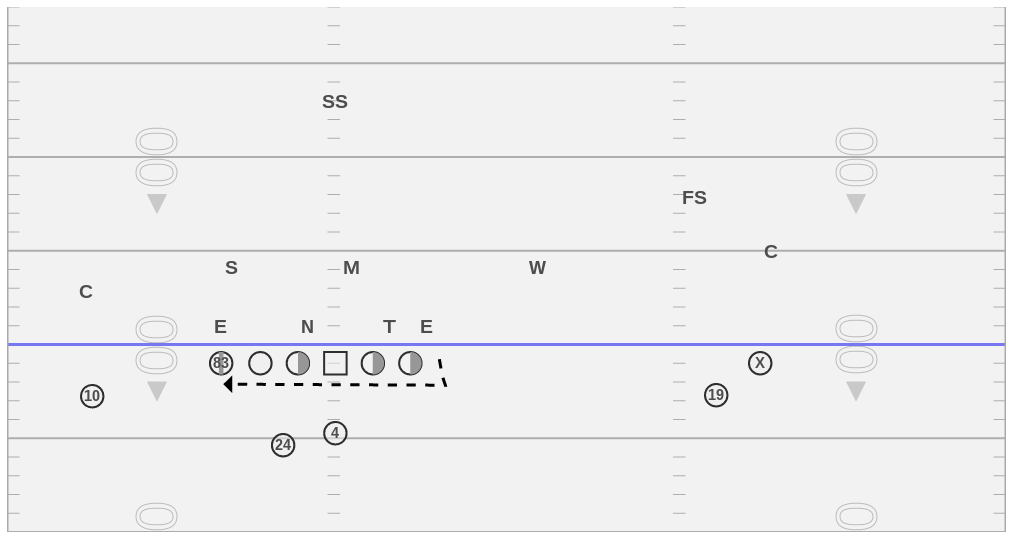 Next, they send the Z receiver #10 Quadree Henderson in motion from left to right, and they end up in a 3x1 trey formation.

So why not just line up that way to begin with?

As I've written about before, if you're gonna call a run-pass option, this is a great formation to do it out of. The defense knows this, so if you're gonna use this formation, you're better off finding a roundabout way of getting there so a bunch of alarm bells aren't going off in the heads of the defenders. 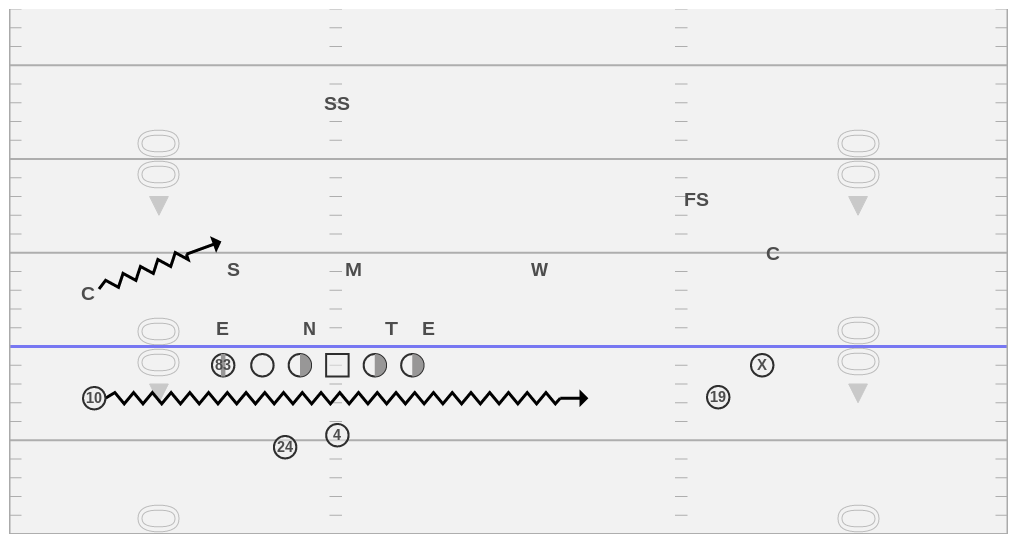 As the offense gets set, the Will linebacker starts to creep up slightly, and so the quarterback Nathan Peterman needs to be wary of getting the ball out quickly against any edge pressure.

At the snap, Peterman rolls out to his right, and the tailback James Conner follows underneath him, tightly following the path of the pulling guard and trying to fit on the inside of the unblocked defensive end.

The path of the tailback is designed to put maximum stress on the defensive end, and if the end comes straight up the field to tackle the quarterback, #24 Conner will be right behind him with a wall of blockers, and the ball in his hands.

In this case, though, the end stays home, so Peterman's eyes turn toward his next read, the WIll linebacker is screaming off the edge, leaving the flat route wide open to Henderson. 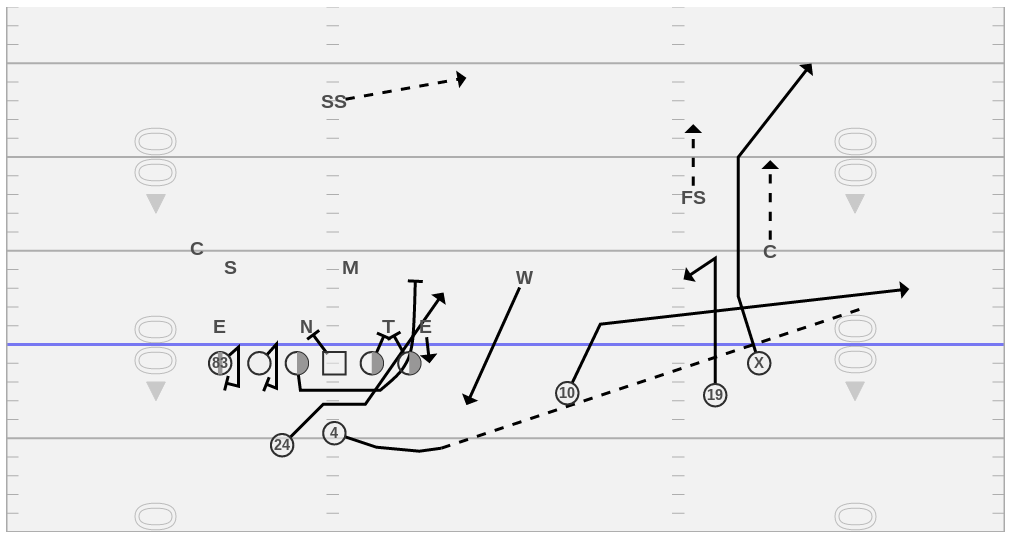 The ball comes out and he makes the catch, and thanks to the soft coverage on that side of the field he's got all kinds of running room to turn up the sideline for a gain of 16 yards and a first down.

It's a creative play call, and Pitt has basically mixed together the sprint out passing game, the triple option, and the power play.

So how exactly does it work?

Let's take a closer look at this play and find out.

Hardcore X's and O's junkies will probably recognize this blocking scheme from so many other spread option teams, including Urban Meyer's offenses dating all the way back to Utah.

The thinking here is that instead of making your offensive line learn a whole new play, why not take something that already works well and find a way to use it to do other things, like, in this case, throw a pass.

The fewer new terms the big guys up front have to memorize, the better, and since they already know what the power scheme is and how to run it, this play fits in perfectly with the rest of their offense.

However, that doesn't mean it's the exact same play design.

There's at least one small but significant change to this play...

The double team on the three technique

Like we talked about earlier, this is a modified version of the power play, so of course there's going to be some kind of double team block at the point of attack. The key difference is that there is no attempt to make a combination block out of it.

In other words, the right tackle and right guard will stay at the line and continue to work on blocking the defensive tackle at the point of attack, instead of one of them climbing to the next level and worrying about the backside linebacker (like a traditional power play).

This has two main advantages.

First, it's a way to safeguard against illegal man downfield penalties.

This has become a point of emphasis lately in the college game, and the easiest way to avoid it is to coach it out of the play. The offensive line doesn't have to remember anything special about not going down the field this time because it just isn't part of the play.

Second, with both of the linemen focused on the block at the line of scrimmage, it's a lot harder for the defense to cause penetration on this play.

As legendary offensive line coach Alex Gibbs is fond of saying, "We may not win every one-on-one, but we better win the two-on-one."

Spot concept on the edge

Moving to the edge of the formation, you've got a concept designed to beat man coverage, and in this case it gives the quarterback Nathan Peterman an easy throw to the flat to Quadree Henderson.

Like a lot of other things on this play, it's not exactly the traditional spot concept, but it's been adapted to fit the needs of the offense and the goal is the same.

This is also an effective way to deal with pressure, at least if you think your quarterback can handle a couple of big hits.

Sometimes, you've just gotta get the football to the edge. You've gotta force the defense to be aware that you can attack any area of the field at any given moment, and you need more than one way to do it.

This shovel run-pass option is a great way to do it, because you still get the quarterback outside the pocket, and since the back is running a path inside as an option, the quarterback has even more choices than if he was just sprinting out and the back was trying to block for him.

A common theme among successful coaches is that they seek out what gives them the most trouble offensively or defensively, and find ways to integrate it into what they do.

When he took the Pitt job, there's no doubt Pat Narduzzi made an effort to attack other defenses with the same newfangled run-pass options that gave him so much trouble as a defensive coordinator at Michigan State.

After the win over Penn State on Saturday, it's likely we'll be seeing a lot more plays like it.