Share All sharing options for: The Cardiac Hill Roadshow: Traveling To Cincinnati 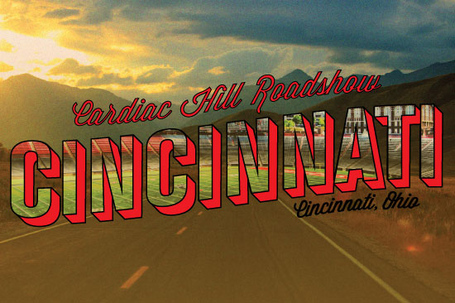 The "Cardiac Hill Roadshow" is a six-part weekly series that covers the ins and outs of traveling to watch your Pitt Panthers on the road this season. We will touch on everything from how to get there, where to stay, where to eat, what to see and do on and around campus, and even some sights you might run into along the way. Join us each week as we offer up information and entertainment as our lead-in to the 2012 college football season.

Today we will look at the trip to Cincinnati, Ohio and the University of Cincinnati.

For further information about traveling to Cincinnati, we've solicited the help of some locals. Here is some advice that Matt Opper of Down The Drive had to offer.

For my money the best place to stay is across the river in Covington. There are plenty of options and price points that can be had. Everything from the Econolodge to Embassy Suites. It's close to almost every late night draw in the area. Mainstrassee is within walking distance, or stumbling depending on your going rate of H.A.M.ness. The Banks (of New York Times fame) is also walkable across the Roebling Bridge. Newport on the Levee is also a quick drive across the Licking River from Covington.

Be forewarned about Mainstrassee though. Depending on the night the hippster swagger can be 1,000 or higher. So if you don't want to hang out with this guy, or that girl or this uber hipster couple, it's in your best interests to avoid that part of Covington.

For my money the best high end food is Boi Na Braza downtown at the corner of 5th and Vine across the street from Fountain Square. A slightly more casual option, also on Fountain Square, is Rock Bottom Brewery. Those are always my go to picks for dinner in Cincinnati. Montgomery Inn at the Boathouse or Haufbrauhaus over the river in Newport are good back up options. In general, the further North of the City Center you go, the more chainy (that's a word now) the food options get.

What To Do On & Around Campus

There aren't a ton of attractions in the traditional sense around Campus. Ludlow Avenue in Clifton has some cool bars, stores and places to eat. One thing I would encourage anyone who hasn't been to the University of Cincinnati before is to just take a tour of campus. It is such a unique campus and it looks unlike anything else out there. Get there an hour early and have a look around.

Gameday Traditions To Take Part In

I always make sure I am in my seat in time for the Charge Down The Stadium Steps. Basically it involves 200 band members running down hundreds of steps with heavy and awkward instruments. How can you not love a tradition that includes the best elements of music and Jackass? Must watch stuff. Then there is the skydivers. Unfortunately the Bearcat is no longer among the jumpers. He had an unfortunate incident with a field goal net in 2008 and hasn't been in the sky since. The skydivers still jump before every game.

Other "Good To Know" Information

Stay away from Skyline. It's a gastronomic atrocity.

Hopefully you found this piece informative and are now planning to attend the last edition of "The River City Rivalry", at least in the near future. Who knows, maybe you'll get to see the Bearcat mascot get arrested again.