Say what you will about the athletic department, but it's worked very hard to create a collegiate atmosphere at an NFL stadium. Moving Pitt football from Oakland to the North Shore wasn't ideal, but it's proven to have been the best option available in light of the countless logistical issues with playing major college football in Oakland. Heinz Field offers fans countless luxuries even a total renovation of Pitt Stadium couldn't have come close in matching.

One of the biggest selling points for moving to the North Shore was the availability of parking, something that crammed and hilly Oakland just couldn't provide. That's still true today. However, with the growth of development on the North Shore, nearby surface lots are rapidly shrinking in favor of revenue-generating development and parking garages. And with the loss of surface lots comes with it the loss of tailgate areas.

The addition of State AE to the North Shore landscape eliminated half of the Gold 2 Lot, which was the closest surface lot to Gate A of Heinz Field. The subtraction of half of a lot displaced a lot of fans and sent ripples from the Gold Lots to the Red and Green as well. Suddenly, people with a lot of Panther Club Points found themselves looking on maps to find where they'd be parking. Or just as bad, groups were split up with one or two cars in a choice lot and the rest relegated to garage parking, where any real tailgating is prohibited by management.

But we all knew this was coming. 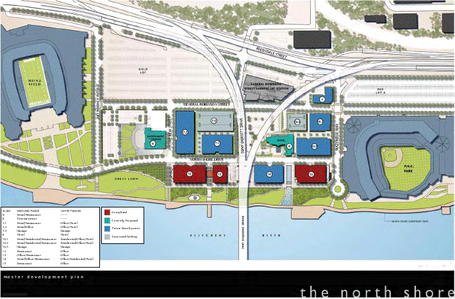 For the most part, that's what the North Shore looks like today. The obvious difference are the buildings shown in what is now the remaining half of Gold Lot 2. Here's a close-up of the area south of General Robinson Street and west of Tony Dorsett Drive (Just east of Heinz): 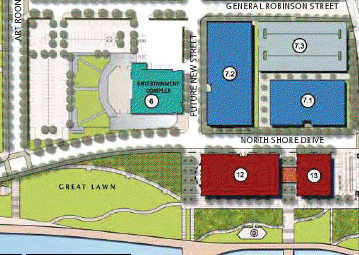 Those blue buildings are a new retail/office complex currently being proposed by the Steelers and the Pirates, who jointly share the development rights to the land. Adios, Gold 2.

It shouldn't be a surprise to Pittsburgh football fans that parking on the North Shore will be further reduced. The powers that be have been consistent in their vision of a North Shore without fields of open-air parking lots. That makes a lot of sense from a revenue perspective for the city, which would rather fans be indoors spending money and not grilling their own food and drinking their own beer in the parking lots. Not to mention their sure preference that fans increase their weekend occupancy of the mostly unused glut of downtown parking - a glut that seems poised to expand further - and either walk across the river or take the new North Shore Connector.

There does appear to be one hiccup, however:

However, before any additional development takes place, there may be some thorny parking issues to resolve.

[Columbus based developer Frank] Kass said there were 3,450 parking spaces available between the two stadiums, about 400 to 500 fewer than the Steelers and Pirates are guaranteed under their agreement with the city-Allegheny County Sports & Exhibition Authority.

New development would take even more spaces out of service. That will necessitate more parking, most likely the construction of another garage. But the SEA, which would be responsible for the parking, does not have the money to build another garage.

Mr. Kass said Continental and the teams had begun discussions with the SEA about parking issues.

"With one hand, we're saying what we want to do next. With the other, we're saying we can't really build anything without any additional parking. That is the conundrum," he said.

So we're presented with an interesting study in public-private partnerships. The SEA must provide a certain number of parking spots - surface lots or garages - between the stadiums, a number which is already not being met. The Pirates and the Steelers are contractually obligated by the SEA to begin developing the lot by March 2013, but doing so would require SEA to build a new garage, for which the SEA doesn't have the money to begin with.

The easiest option would be to the leave Gold Lot 2 as is for the time being by extending the deadline for development. And while that might be the easiest solution, it's hardly the most beneficial to the city and county's tax coffers. I still expect financing to be worked out well before the March 2013 deadline, which could mean Gold Lot 2 to be no more for the start of the 2014 season if the garage can be built quickly.

Further reducing the ability of fans to tailgate is obviously not good for Pitt, which already has major issues getting people to the games. Despite the product on the field lately, the six to eight Pitt football gamedays are among the best of the year for me, and a big part of that is because of the tailgate with family and friends. Even with the availability of several bars and restaurants, the gameday experience just isn't right without grilled meat and canned beer in a folding chair.

Yes, there are other surface lots on the North Shore, but the total elimination of a prime lot is another headache for the Pitt athletic department as it tries to build excitement after a depressing few seasons.