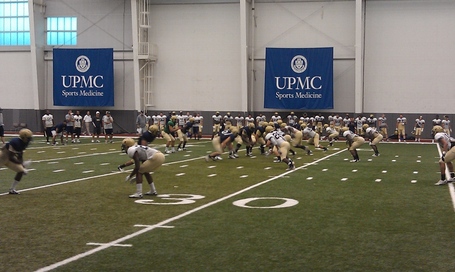 The Panthers continued with their two-a-days on Friday, with the morning session being open to the media and the afternoon session being a closed session. Due to unfavorable weather conditions (ominous looking clouds and rain), practice was moved indoors. Despite being inside, practice continued following the same structure we have documented earlier this week.

Checkout a rundown of today's events after the jump.

Practice opened with special teams drills and kick returns. The five guys getting a chance at returning the kicks again today were Corey Davis, Cam Saddler, Brandon Felder, Ronald Jones, and Kevin Weatherspoon. Davis had a nice return out to the 35, but failed to down the ball in endzone later on when instructed to do so by his return-mate Kevin Weatherspoon.

A good portion of practice involved a good bit of 7-on-7 and 11-on-11 drills. Tino Sunseri ran the first team and Chad Voytik continued to run the second team with Trey Anderson not suiting up. Tom Savage took a snap here and there, but nothing significant. On the ground, the offense did fairly well behind Isaac Bennett and Malcolm Crockett (despite his two fumbles). Those two received the bulk of the carries as Ray Graham was not in pads again today. Through the air, Andrew Taglianetti came up with a pair of interceptions on the day as he continues to have a strong camp.

On defense, as we had mentioned earlier, Tyrone Ezell started the day at defensive tackle. Midway through practice, coaches decided to move Ezell back to nose guard. When asked if he expected the coaches to plug him in where ever he is needed, Ezell said "So far I don't expect them not to do that, but I'm ready for that if they do decide to do that during the season. But today they told me to switch to the nose so right now that's all I'm really focusing on at this point."

In what I would call the hit of the day, redshirt sophomore DB Lloyd Carrington laid a solid hit on freshman WR Chris Wuestner...while being actively blocked by another WR.

Following practice, Jamie Dixon came to the South Side to address the team. When asked about the visit, Coach Chryst said "I wanted our guys to hear from him. There’s a guy when you think about a program. We want to be that. The consistency. There are guys that probably have never been face-to-face with him and now they got a chance to. I really appreciate it."

Saturday morning will mark the second scrimmage of training camp, and the two week mark until the season begins. In regard to what the coaches would like to see tomorrow, OC Joe Rudolph said "Obviously, we should be at a point where guys are doing their assignment. Now you want to see them do it with the detail you teach them. Whether it’s in the run or the pass, you want to be able to kind of establish some things running game-wise. And when you have the opportunity to throw, which we’re going to, you’ve got to be able to make plays, and I want to see some guys step up in that respect."

Stay tuned to Cardiac Hill tomorrow as Anson and company will be reporting back from the scrimmage.