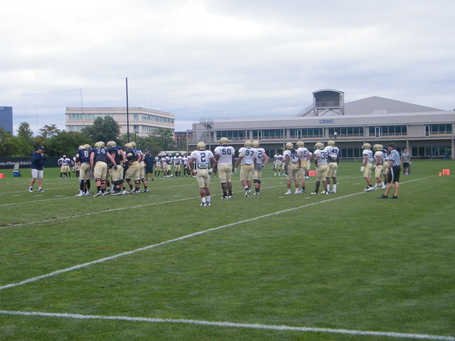 Greg and I went down to the south side to catch the Panthers' second closed scrimmage of training camp today. It was a bit harder to follow everything this time around since parents and several guests of the university were around, but plenty of noteworthy things worth mentioning.

Greg's going to have more on this later, so I'm not going to expand too much right now. But I'll offer a few brief thoughts and you can do with them what you will.

Before you get too worked up, Tino Sunseri took the first team reps and is still the starter - that's not in question. But with Trey Anderson out again, Voytik had command of the second team and looked really good in my eyes.

One thing that stood out was that he performed well sometimes with not much of a chance with defensive linemen getting after him. He completed a lot of his passes and not only was an effective scrambler on a few plays, but made completions on the run. It's really early and the first time we got a good look at him in a scrimmage, but it will be interesting to see if he remains the No. 3 behind Trey Anderson for very long. This is just one man's opinion, but he looked more effective than Anderson did last week.

And not to heap too much praise on him, but one thing I was impressed with was his distribution of the ball. He found lots of different guys on completions today - the ones I saw were Josh Brinson, Brendon Felder, JP Holtz, Mark Giubilato, Chris Wuestner, and Kevin Weatherspoon, and there's a good chance there were others. He spread the ball all over the field and made good use of the weapons he had.

Sunseri started off pretty slowly, but picked things up in the second half. Again, I don't want to go too much into the quarterbacks here since Greg will be hitting on that later, but Tino got better as the game went along in my mind. The other small note I had was the absence of the deep ball. There were only one or two deep shots taken by my count and I think that's one thing we won't see a ton of out of Chryst. And, really, that's probably the right way to go.

Plenty more on the day than just the passers, though.

Another standout on offense today was Ronald Jones. I wasn't keeping good track, but I'd estimate he had at least 6-8 catches and some really nice runs after some of them. Pitt may not throw a ton of deep balls this season, but yards after the catch is where they can really do some damage. Jones is a speed guy and guys like he, Street, and Brinson can really break out for some big gains on short-intermediate throws. He also had a long return on a kickoff and is the perfect all-purpose type of guy. We also saw him run some gadget plays under center in Todd Graham's offense last season and while I'm not sure how much of that we'll see with Chryst, he's got the skill to do things like that.

With Rushel Shell out, Malcolm Crockett backed up Isaac Bennett. Both had a decent day and have had a solid camp. Will be interesting where he and Shell end up on the depth chart. It's really looking like it will be tough for Corey Davis to get many touches, but he's being utilized quite a bit on returns so there's plenty of chance for him to contribute.

On defense, the unit that had a really good day in my mind was the defensive line. We discussed this last week, but part of that is probably due to some poor play by the offensive line. But those guys are getting after it, too, and they should get some credit. The second team DL was really impressive and made it hard for Voytik to get anything going. There was a lot of talk about this being a young, inexperienced bunch and while that may the case, I still expect them to be pretty good..

Kicker Kevin Harper's been a bit inconsistent according to Chryst when he spoke to the media after the game. He missed a kick in the 40's range, but also hit some others, including one that was about 50 yards. Kid's got plenty of leg and when it comes down to it, I expect him to be pretty dependable this season.

And while we're on the topic of special teams, there have been a ton of great returns in the two scrimmages. K'Waun Williams and Ronald Jones both broke nice returns today and there were a few others between the two games. I don't know if that speaks well to their abilities or poorly to the return coverage, but we'll find out soon enough.

Check back later as we'll have quotes from Paul Chryst and also Greg will hit on the quarterbacks a bit.