If you buy something from an SB Nation link, Vox Media may earn a commission. See our ethics statement.

Share All sharing options for: The Cardiac Hill Roadshow: Traveling To Notre Dame 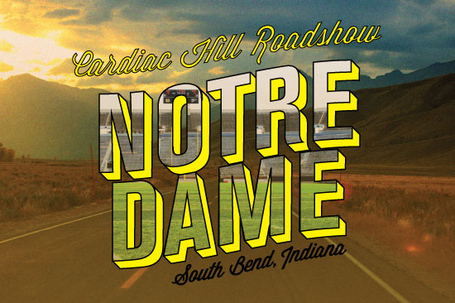 The "Cardiac Hill Roadshow" is a six-part weekly series that covers the ins and outs of traveling to watch your Pitt Panthers on the road this season. We will touch on everything from how to get there, where to stay, where to eat, what to see and do on and around campus, and even some sights you might run into along the way. Join us each week as we offer up information and entertainment as our lead-in to the 2012 college football season.

Today we will look at the trip to South Bend, Indiana and the University of Notre Dame.

For further information about traveling to Notre Dame, we've solicited the help of some locals. Here is some advice that Chris of One Foot Down had to offer.

If you don’t mind having a designated driver on Friday night, it’s not a bad idea to stay a little bit outside of town. Check out hotels that you can get to in a thirty-minute radius around South Bend and A) They’ll be way, way cheaper and B) You might actually be able to get a room, because most of the ones anywhere near campus are already sold out for the upcoming season.

Another option my friends and I have started embracing is renting a house for the weekend through places like Gameday Housing. It depends on how many people you have, but we locked up a place for this year’s Michigan game (which is in primetime) for $2500 for the weekend. We’re going to cram at least twelve people in it and you have it from 3pm Friday to noon Sunday, which is a way better nightly rate than you’re going to get crammed into a hotel. You can also generally get the houses within walking or cheap cabbing distance of bars. We did this last year for USC and it was a huge success.

South Bend isn’t exactly known for its cuisine, but there are a few solid options. Probably the nicest restaurant downtown is the LaSalle Grill, but also the priciest. There are a number of great pizza places, with my favorite being Rocco’s, although you can’t go wrong with Bruno’s or Barnaby’s. My favorite burger in town is a little hole in the wall called The View, which has cheap beer and legitimately good cheeseburgers. If you want to drive a little bit farther out of town, try the Oaken Bucket, which has a pretty robust menu of food at a very low price. (My dad and I actually went there before watching Pitt/ ND hoops last December.)

If you’re interested in something a little safer and perhaps with a shorter line, nearly every chain restaurant you could want is out by University Park Mall on Grape Road. There are also a few nice options at the relatively-new Eddy Street Commons, but that has only been open for a few years and I’m not as familiar with their fare.

If you want to grab a bite to eat on campus, I highly recommend South Dining Hall, which supposedly inspired the Great Hall at Hogwarts. They do a great candle light dinner after the game. The LaFortune Student Center is next to the main building and has your usual fast food options, while Reckers is a 24-hour pizza, sandwich and smoothie place right behind SDH.

What To Do On & Around Campus

I know I’m biased, but I can’t imagine there being many college campuses more beautiful than Notre Dame. I encourage you to get there early and just wander around, as we have a pair of lakes, the beautiful Basilica of the Sacred Heart, the shiny main building (the one with the Golden Dome) and the Grotto, which is just..well, look at it. Notre Dame’s bookstore also offers an ND logo on anything you could possibly want, and there will be Pitt/ND-specific shirts honoring that weekend.

If you’re in on Friday night, they’re now doing the pep rallies outside behind the DeBartolo Performing Arts Center on something called the Irish Green. Just behind that area is the previously-mentioned Eddy Street Commons, where there are a few bars you can hit up. There’s also a bar on-campus called Legends, but it is generally pretty crowded on game weekends.

If you want to get adventurous, you can swing by Corby’s or Finnigans (officially the Blarney Stone but I have literally never heard anyone call it that), which are always packed to the gills on game weekends. If you just have a few friends and want to chill out with cheap beer and some good tunes, nothing is better than The View.

Gameday Traditions To Take Part In

The athletic department set up an entire website just with crap to do on the day of the game, so be sure and check it out for detailed schedules with times for everything, including a bunch of stuff I probably do not even realize is happening. A few bullet points:

Other "Good To Know" Information

I think your questions pretty much covered it. Feel free to reach out to me on Twitter at @rakesofmallow if you have any questions about coming to visit South Bend, or if you just want to talk about how good Andrew McCutchen is at baseball. (I’m actually wearing the Nike "We Are Family" t-shirt as I finish writing this [on the evening of July 16th], although Grilli just allowed the Rockies to walk off after Pedro tied it.)

With the history and tradition of college football that comes with a visit to Notre Dame, there are not many places that can compare...and I think Pitt fans realize this. Every other year when the Panthers make the trip to the midwest, we travel in droves (if only we traveled that well to bowl games, we wouldn't continually get stuck in Birmingham). If you have yet to attend a game in South Bend, make this the year you do so.