From the Nike design room: Pitt what if?

Cardiac Hill takes a look into what a meeting in the Nike design room could be like when designing a new Pitt football jersey.

Share All sharing options for: From the Nike design room: Pitt what if?

College football jerseys are a hot topic right now. Ever since Oregon decided they wanted to look like they were Trick or Treating every week of the season, many college football programs have experimented with different jerseys. Some look pretty awesome and others look pretty terrible. Nike used these alternate jerseys to introduce their Pro Combat jersey cuts. Pitt had their turn in the second season (if I remember correctly) of Pro Combat jerseys, where Nike produced a blue and black jersey with lettering and striping that resembled steel beams. That was disappointing. Let's pretend that Pitt's up for a new alternate jersey and take a peek into the Nike design room.

The location is Beaverton, Oregon. Several Nike employees sit around a conference table looking at proposed designs for the Pitt Panthers next alternate jersey. They must make a decision on which jersey to present to Pitt Athletic Director Steve Pederson. (Click on the images for higher resolution versions.)

Nike Exec 1: Okay, we have five jersey presentations to look at and then we can get back to making up something new for Oregon next week. They're trying to combine chrome, green, yellow, and make the jerseys out of chain link. It's going to be a tough job, so let's get Pitt out of the way. Their current jerseys are pretty boring so this shouldn't be hard.

Nike Designer 1: I'll present my idea first. I visited Pitt's campus last year and designed my jersey after the one thing on campus everybody knows and loves.

Nike Designer 1: Um, anyhow, I based my design on the Cathedral of Learning. It shows strength, integrity, and perseverance since the thing is like 100 years old. What do you think? 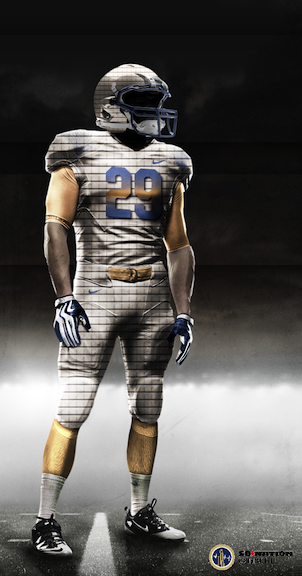 Nike Exec 2: I think I'm going to lose my lunch.

Nike Exec 1: Yeah, this reminds me of a bad plaid pattern we designed for Carnegie Mellon University a few years ago. Sorry but it ain't happening.

Nike Designer 2: How about this idea? Pitt's mascot is a panther, which is gold in color. The University's colors are Blue and Gold. Here's a panther inspired gold uniform. The eyes on the front of the helmet can instill fear into the heart of their opponents! 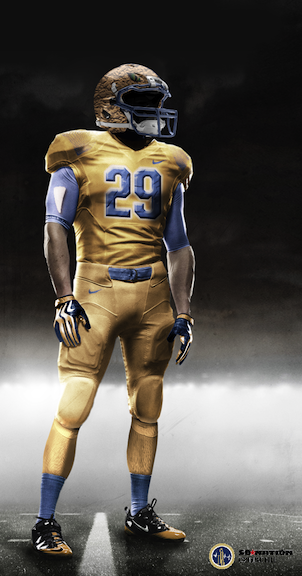 Nike Exec 1: Well, it's okay, but Oregon gets really pissed when we use mascot based themes for other schools.

Nike Exec 2: It's a maybe, we'll keep it hanging around. Is that a saberooth tiger tooth on the side?

Nike Designer 2: No, Pitt used that tooth logo back in the early 2000's so I brought it back. 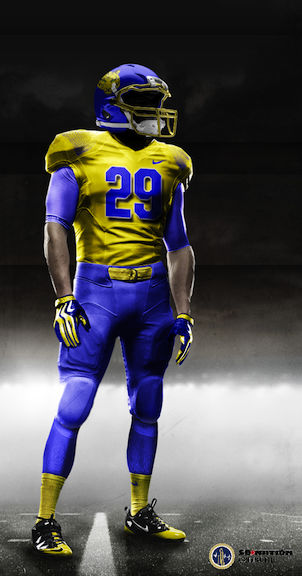 Nike Exec 1: That's clearly a tiger head on the side. Did you take your random drug screening recently? Next.

Nike Designer 4: Pitt and the Pittsburgh Steelers share a stadium. I thought it would be interesting to take the Steelers' uniform design and adapt Pitt to that style. For the helmet I used the University seal only on the one side. Thoughts? 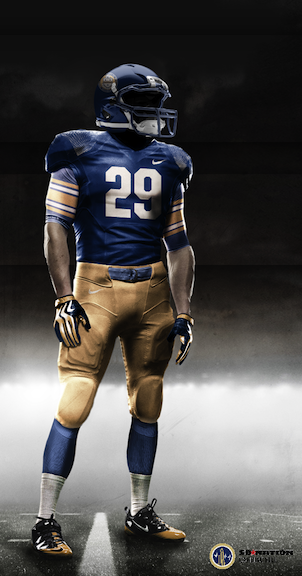 Nike Exec 2: Do we actually pay you for this? I mean, there's lazy and then there's LAZY.

Nike Exec 1: Well, it does have a certain sense of class, but I doubt it will go over well. What about our intern, what do you have?

Nike Intern: I decided to do something completely different. Why use the same old colors with an alternate jersey? I used a black matte helmet and all grey uniform, with a transparent Pitt logo on the helmet. Then, instead of a number centered on the chest, I used UP for University of Pittsburgh in the same manner of those Wisconsin and Nebraska noid jerseys Adidas released. Here it is: 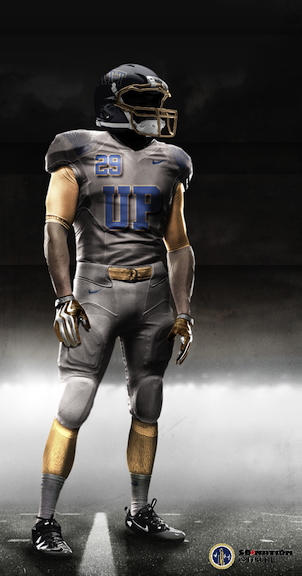 Nike Exec 1: We can't be blatantly ripping off Adidas's ideas. Are you actually getting college credits for this?

Nike Exec 2: Do we have ANYTHING that is even presentable?

Nike Designer 2: Well, I do have one last design. It's a retro theme that I think will go over pretty well with the fanbase. 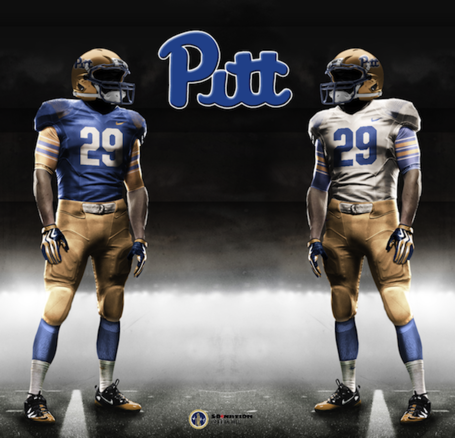 Nike Exec 2: I've heard Steve Pederson isn't too fond of the Pitt Script stuff. If we present this he may pull out his ACC branded ninja stars and attack. I mean, you saw what happened with Mike Haywood right?

Nike Exec 1: Pitt wasn't even in the ACC then, were they?

Nike Exec 2: Correct, they were branded "Wanted: A good conference home" at that point.

Nike Exec 1: Well, back to the drawing board I guess.