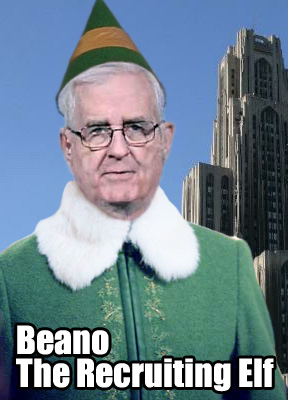 That's right, it's Beano, the Recruiting Elf. Which means Pitt has gotten the commitment of another prospect for the 2013 class.

Mike Copper of the Erie Times-News has reported that McDowell RB/DE James Conner has committed to the Panthers. He comes in a 6'2" and 232 pounds and played RB and DE in high school, but it's probable that the coaching staff will place him on the defensive side due to need at the position. He seems a bit undersized currently for the position, but the staff will be able to bulk him up after a year or two in the weight room.

His offer list is a MAC-smorgasbord with offers from Bowling Green, Eastern Michigan, Ohio and Toledo. Conner is a 3-star DE by Rivals and unrated by ESPN. He has heard from other BCS schools such as Illinois, West Virginia, and Ohio State, but there was concerns of his eligibility. However, it appears that he will be eligible for next season after attending summer school.

As I said above, he initially played RB until the final 5 games of his junior year. He voluntarily switched to DE with 5 games left in the season. The end result was 12 sacks in 5 games, a single-season record at McDowell H.S. The talent is there and with a season in the weight room under the coaching staff will improve his game.