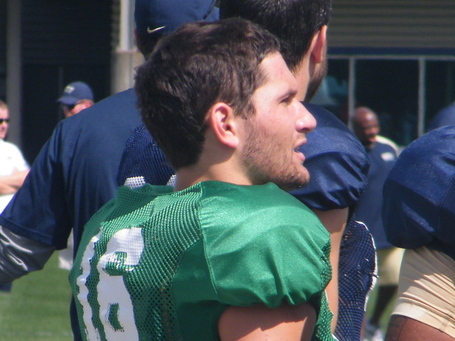 Anson and I traveled down to the South Side on Saturday for Pitt's final scrimmage of fall camp and came away with a similar opinion after the nearly three-hour scrimmage.

Chad Voytik could be a pretty good QB for Pitt.

Before I continue, let's be clear. Tino Sunseri is going to be the starting QB for the 1st game against Youngstown State and will likely remain the starter for the rest of the season barring injury or bad play. We should all hope that Paul Chryst doesn't have to replace Sunseri with Voytik or Trey Anderson when Voytik could be redshirted this season instead.

We've all wondered about the possibility of Voytik getting the start over Sunseri, however unlikely it may be. Before today's scrimmage, I never felt it had any backing and after seeing Voytik in practice last week, I felt even more confident that he was likely heading for a redshirt season. But then Trey Anderson got sidelined with a minor injury and Voytik began receiving most of the second team snaps and has looked good in the process.

The scrimmage wasn't kind to either QB, especially during the first half where the defense dominated, limiting the offense to field goals. The second half saw the offense open up a little more and connect on more passes. Both quarterbacks had a couple nice throws, including a perfectly thrown 30-yard touchdown pass from Sunseri to Joshua Brinson.

But Voytik seemed to take a big step forward from last week when he played only sparingly in the scrimmage. He looked good throwing the ball, spread the ball around to a number of different receivers, and was crafty enough to avoid getting sacked and make throws on the move.

That's not to say Sunseri didn't have his moments as well. He did what we expected him to do well. He completed several short and intermediate routes and attempted and completed a few deep passes. Obviously, we all want him to have completed a few more passes and make better decisions in games, but he's still getting there and hopefully in the next few weeks, he'll be able to get a better handle on Chryst's system as we get closer to September 1st.

Getting back to Voytik though - he has been a clear benefactor of Anderson's injury. Getting more time and reps with the second team has clearly had a positive impact on his play and he just looks better at the position than he did a week ago in practice. The question then becomes, can he surpass Anderson and become the backup? Do we want Voytik to get game experience this season and burn a potential redshirt season? Those are tough questions that Paul Chryst and the rest of the coaching staff will have to answer over the course of the season.

If it were up to me, though, I would keep Voytik off the field if possible. It's really early to project so far out, but if he proves he can play during games, Pitt has a chance here to give Voytik four years of being the starter and mastering the Paul Chryst offense.

Leaving Saturday's scrimmage, we got a glimpse of Pitt's quarterback of not only today, but perhaps the future. And I have to say, the future's looking bright.