A deeper look: Was Matt House as bad as believed in 2013? Maybe not.

A statistical look at Pitt's 2012 and 2013 defenses reveals a surprising conclusion.

Share All sharing options for: A deeper look: Was Matt House as bad as believed in 2013? Maybe not.

Pitt defensive coordinator Matt House has been a lightning rod for criticism all year. I have been part of that crowd. I was underwhelmed, to say the least, when House was promoted from secondary coach to defensive coordinator back in February. So too were Panther fans who criticized the hiring then and continued to blast House throughout the season as the Pitt floundered to yet another 6-6 finish.

But, as number-crunching wizard Michael Bloomberg is famous for saying, "In God we trust, all others bring data." So, I decided to bring data. I was curious what the numbers would actually say about House's unit compared to Dave Huxtable's in 2012, since the defense ostensibly regressed so much this year. Initially I began this analysis with the hopes that it would illustrate House's incompetence, but what I found was quite surprising. Let's dive in.

I started by comparing last year's depth chart to this year's since different players will obviously result in different outcomes. The Panthers had very little turnover on the defensive side of the ball from 2012 to 2013. A quick look at the depth charts reminds us that defensive end Shayne Hale, linebacker Eric Williams, and safety Jared Holley were the three starters who Pitt lost to graduation. All three were solid players, but none can be considered huge losses. They were replaced this year by David Durham, Anthony Gonzalez, and Ray Vinopal, respectively. The rest of the defensive starters look exactly the same between the two years. It's reasonable, then, to say we have a pretty equal base to build our comparison off of.

Looking at these numbers, the defense looks like it clearly took a big step backwards under House. The Panthers allowed an average of 48.3 yards per game more this year which dropped them from 16th in the country to 42nd. Points allowed is even worse. House's defense allowed 7.6 points per game more this year which dropped the ranking from 21st to 69th. By any measure, the 'total defense' stats seem to point towards a huge decline in performance from Huxtable to House. But, this is not the whole picture. We need to consider who Pitt was playing in those two years in order to make a fair comparison since, for instance, having to defend a MAC offense is a lot different than an SEC offense.

In case you forgot, the Panthers moved from the Big East to the ACC - a move heralded as a significant upgrade in competition. Let's see if the numbers bear that out. I looked at the offensive production of Pitt's 2012 and 2013 opponents to see if House and the 2013 defense actually faced better offenses than Huxtable and his 2012 squad did. The stats say they certainly did. 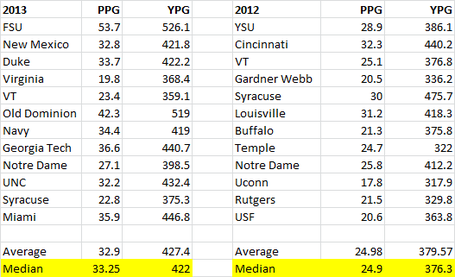 Let's start with yards per game. In 2013, the offenses that Aaron Donald and the defense faced were better than in 2012. How much better? An average of 45.7 yards/game better. Now look at Pitt's defensive numbers from above - on average we allowed 48.3 more yards/game in 2013. The extra yardage allowed per game almost matches the average offensive improvement we faced. Points per game is even more intriguing. The offenses we faced this year scored an average of 8.35 points/game more than the teams we faced in 2012. And our defense? From above, we see it allowed 7.6 more points per game this year. The increase in points allowed by Pitt's defense is actually less than the increase in points scored by the average offense we faced.

So what does this tell us? Contrary to what we've all been convinced of, Pitt's defense, in fact, did not get worse in 2013. It just had to face better offenses - and incrementally it performed at nearly the same level as 2012.

So what does this mean for Matt House? Well, it means that he may not actually be the incompetent fool we've all thought. The numbers don't lie and they tell us that while Pitt's defense didn't improve in 2013, it really didn't get worse either. A decent defense in the Big East, all else equal, is a below average defense in the ACC.

We need more than better coaching. We need better players.