Quantifying expected wins and Pitt's under-performance in the NCAA Tournament

It's no secret that Pitt has failed to meet expectations in the NCAA Tournament...but can we quantify by how much?

Share All sharing options for: Quantifying expected wins and Pitt's under-performance in the NCAA Tournament

The 2013 NCAA Tournament was not even four hours old and Pitt fans we're already being sent home with that all-too-familiar feeling of disappointment.

Another impressive BIG EAST regular season. Another lackluster performance in March. Another loss to a lower seeded team.

Has any other team accomplished so much during the regular season only to accomplish so little in the NCAAs over the last decade? Anyone?

Has there been? How can we quantify regular season success and the expectations it creates in the NCAA Tournament?

Simple. The NCAA Tournament Selection Committee has already done this by evaluating each season's body of work and assigning seeds based on it.

Disclaimer: I am not a statistics major. If you have any feedback on how I came about these numbers, please leave it in the comments section below so that I can make improvements in the future.

The simplest way to assign an "expected wins" value to a seed is by looking at the number of wins by teams assigned to that seed have had in the past. For this exercise, I used the NCAA Tournament's field of 64 teams from 2002-2012 (11 seasons) and averaged the number of wins per seed. The Opening Round games (2002-2010) and First Round games (2011-2012) were excluded. Here are the results: 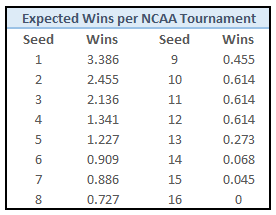 So how did Pitt fare against it's "expected wins" in the NCAA Tournament from 2002-2012? To find out, I took each of the Panthers' tournament appearances and subtracted "expected wins" from their actual wins. 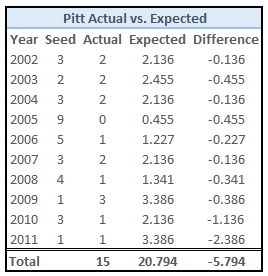 Basically, during the Howland/Dixon era, Pitt failed to meet the "expected wins" mark every single time...so much so that the Panthers under-performed by nearly 6 wins over their last 10 appearances.

An "actual vs. expected wins difference" of -5.794 is a very large number. So where does that place the Panthers among the 205 NCAA Tournament participants from 2002-2012?

Yes, there is one team that came with an "actual vs. expected wins difference" of -7.726. That team is the Duke Blue Devils. 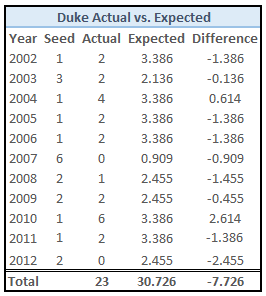 As you can see, Duke was seeded on the one or two line in nine of the 11 years. In seven of those nine years, they failed to reach the Elite Eight, averaging 1.44 wins per year. What about those other two years? Well, the Blue Devils lost to the National Champion UConn Huskies in the 2004 Final Four and won the 2010 National Championship.

Rounding out the Top Ten are Michigan State, UConn, UCLA, Kentucky, Xavier, North Carolina, Florida, West Virginia, and Indiana (respectively)...all of which had an "actual vs. expected wins difference" of greater than four. You can download the entire list in an Excel spreadsheet here.

Yes, the Duke Blue Devils did have the largest negative "actual vs. expected wins difference" . However, the phrase Brian used in his original question was "accomplish so little". Since Duke accomplished the ultimate goal of a National Championship in 2010 and came close in 2004, Pitt will nod to move to the bottom of this list.