Ahh, you know it's peak offseason when you start getting that football itch enough to make a fanpost on SB Nation. As the title states, this fanpost will focus on improving the atmosphere at Pitt Football home games against the uninteresting opponents. For those of you Pitt fans living under a rock (not Roc), those uninteresting opponents include pretty much anyone on the schedule not named Penn State, WVU, Notre Dame, or any meaningful game (i.e 2013 ACC Inaugural Game vs FSU or 2009 Cincy for the Big East Title). The truth of the matter is, most Pitt games aren't well attended against the uninteresting opponents, and realistically never will be. This fanpost will look at improving the perception issues with fan energy and visibility. Fan energy, meaning making the stadium louder during live football action (and not things like t-shirt tosses), and visibility, meaning limiting seeing those awful yellow seats on TV. This post WILL NOT focus on how to get more Pitt fans out to games (except for students). Shall we begin? 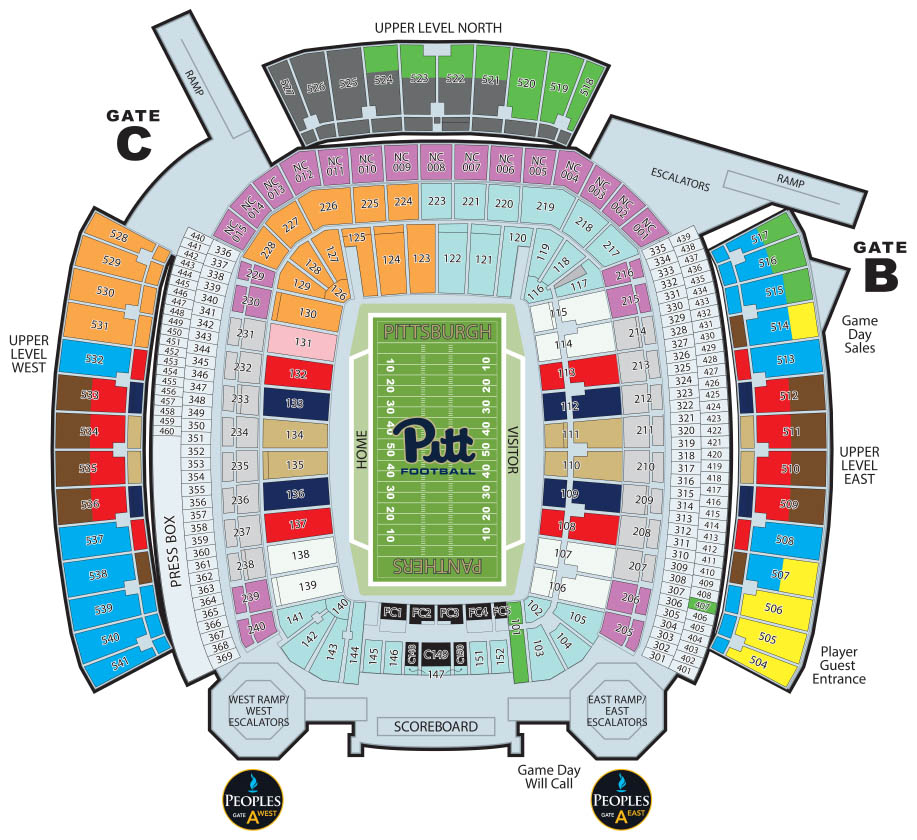 The first change I would make is to relocate the student section and band. Currently, that all resides in bottom sections 130-123, middle sections 228-224, and upper level 528-531. If there is anything that has actually been proven time and time again at Pitt games, it's that students actually show up, even if it's only for 3 quarters. Unless the weather is complete shit or the team really sucks (think circa 2012), they turn out consistently.

With that said, It’s absolutely stupid to have them in the corner of the stadium. I understand the need to provide premium seats behind the goal post to high paying customers, but the first thing that needs to be fixed in the stadium is the energy. Most of that energy stems from the student section. In a....gasp....PSU study (that i read a few years ago but don't feel like finding again b/c I am not getting paid to write this) on student sections, they found a student section is loudest and most disruptive when placed behind the end zone. Move the student section and band to the North End Zone. Put the band front and center leading the charge. I know there is a walkway at the center of the end zone, but I’m sure Pitt can provide makeshift seats to fill the gap (maybe?). Allow the band and students to take sections 120-125, 219-226, and the entirety of Upper Level North (ULN).

Next, provide more season tickets to students (currently allotted 10k I believe). Not only will more students turn out for big games (creating more of a home field atmosphere), there will be opportunity to better control those sections when attendance is down. The main opposition for this happening is the blowback from loyal season ticket holders already in ULN, but this is almost necessary if we want to see real change in the home field environment. To me, having a control variable at Heinz for games is essential when Pitt has such varied turnouts for different opponents.

With that said, tickets will not only go to Pitt Students, but should also be offered to Carlow, Robert Morris, CMU, Duquesne, PPU, and whatever other college students in Pittsburgh. Pitt is the only Division I football program in the city. The 6 other universities in the city are deprived of the D-I A football experience. There must be some takers from those schools, which will only help with attendance. By the way, there is a total student base of approximately 60-70k students in Pittsburgh (https://en.wikipedia.org/wiki/List_of_colleges_and_universities_in_Pittsburgh). There is no shame in making students from other schools come out when you are trying to be the D-I football team of the Pittsburgh region. Also, imagine the home field advantage when the student section is at capacity. The would be close to an entire endzone full of (hopefully drunk) students. As I stated previously, most of the time the only full section at the start of Pitt games is the student section, so why not start from there.

My next move is to demand more from the top student organizations at Pitt. Penn state (don't kill me) has the S Zone. I don’t know too much about it besides it is present at every home football game. Other schools have other similar sections that become a point of pride for those students. They show up to every game for the entirety of the game regardless of outcome. Could that be something our Alumni Association could do? Perhaps Pathfinders? Perhaps student government? Maybe a combination of multiple student groups? We need to start conveying these points of prides from current student organizations over to sporting events. If you ever met a PathFinder, you know they are already passionate. This will also give these student groups a visible marketing tool they can reference to enhance their on-campus presence.

BUT NOBODY SHOWS UP TO PITT GAMES ANYWAY (student too)! I know. Let’s talk about tarp and put the shame of the word to rest. Pitt attendance historically hovers around 45-50k people. If you threw that into Baylor’s new stadium, the perception of Pitt football would be just fine. You throw that crowd into Heinz Field and…yikes. Historically speaking, Pitt fans will never fill up Heinz, achieving 66% capacity on most days, maybe more maybe less. This obviously is THE major drawback of sharing a stadium with an NFL team. But honestly, who cares, accept the reality people. It’s not shameful to admit we don’t have a large fan base. This bad perception is only enhanced by the fact that our biggest rival has a stadium capacity of 107k (soon to be cut down) and averages about 90k fans per game, and higher than that during a championship season. Whatever, that’s them; I’m talking about us. Stop looking up to them, it plays right into the little brother card (not trying to sound like a hypocrite either referencing their S zone, it just helped make my point earlier about student groups). PSU is the main state university with a major college football program playing at a national level. Keeping up that image has done some very good things for them, and also some very bad things. Good on them for becoming that Beast of the Northeast, I hope they stay that way because if Pitt ever starts playing at that same level (like at the height of the rivalry in 70s and 80s), it will be good for Pitt too, especially when Pitt beats them (like last year).

That point aside, back to seating capacity. Tarp the original upper student section . Tarp the corresponding section on the other side of that same level. Those are the non-TV angles. Who cares! For the non big games, even if you tarp 10k seats total, the stadium capacity is bout 58k at Heinz. For those of you who hate math, that is a much more manageable 80% capacity with a historical Pitt home crowd. Also, with the new student section layout, that provides an opportunity to possibly tarp the two end sections of ULN (the new upper student section). So yes, when it’s cold and miserable out and Pitt’s playing fucking Duke football, we can do some crowd control.

I've always felt most engaged at sporting events when I’m socked in a section with people all around me. It’s hard not to get loud when everyone around you is doing the same. Let’s take Pitt’s first ever ACC game against FSU. It was mainly a Pitt crowd. Now think about that opening drive down the field ending with Tom Savage hitting Manessah Garner for a touchdown. That was one of the loudest Pitt football moments of my life. Sure we got throttled the rest of the game, but my point is the crowd was all there; it was the same for Cincy. Yes, these were bigger games in front of soldout crowds, but these atmospheres can still be recreated on a smaller scale if you can confine the crowd enough. If you create the allusion that fans surround fans, a buzz is generated. It becomes contagious. It’s enough to create a pretty decent atmosphere with 45k people, instead of a scattered 45k. Confine the fans, and the atmosphere will exist (TV angles aside).

These are just a few things that the University can do to help improve atmosphere and visibility. I think it's foolish to continue to rely on non-students to show up to games when time and time again fans prove they don't show up for the uninteresting opponents. Yes it's the same for students, but I feel by offering more student tickets, this helps negate the difference. Also, by controlling Upper Level North, a non-tv angled section, this will help with fan visibility in the main tv angles. Tarping the other non tv angles helps with this as well. This will make the below tv angle a little more bearable. 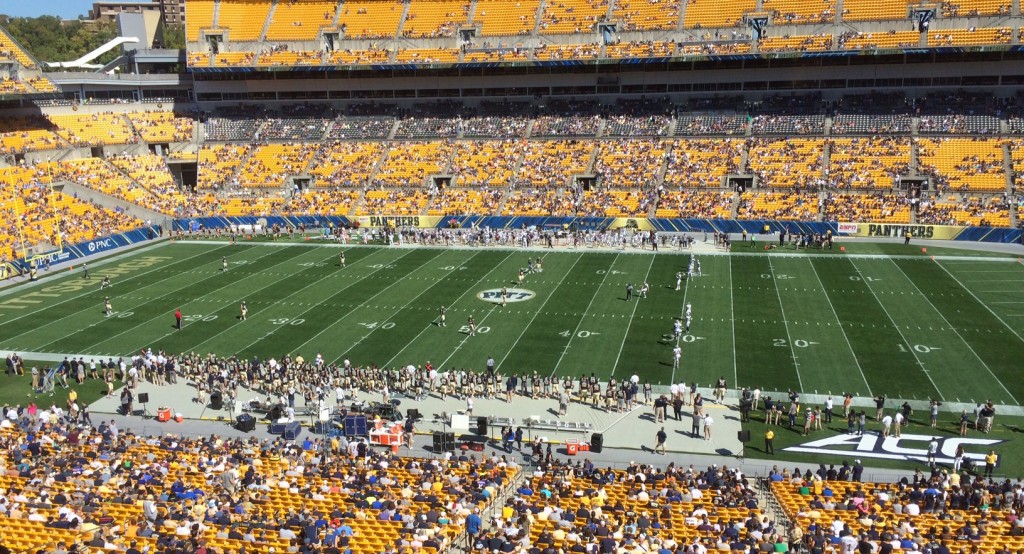 It's time to really address the situation. The perception of Pitt football home games will never change unless the administration does something drastic.

Do you think Pitt needs to rearrange stadium seating?