First of all, let me apologize for my last fan post... it took a while to compile several years worth of data, and then I skipped showing my work when posting. I will have to go back at some point and show the calculations and maybe better expound on my conclusions. But I will continue to stand by my claim that the eye test and the math do show the differences between the systems as opposed to just "it's the players". Anyway, that'll be a post for another day.

I was lucky enough to have floor seats for the Pitt-Louisville game yesterday, so I got to see this Pitt team up close and personal. Here are my thoughts and some of my photos from the game. (Please note, I am not a professional photographer- these are taken with a cell phone and will be compressed for size- so I know these will not win any Pulitzers. I did this for the same reason I do anything- it was fun!) 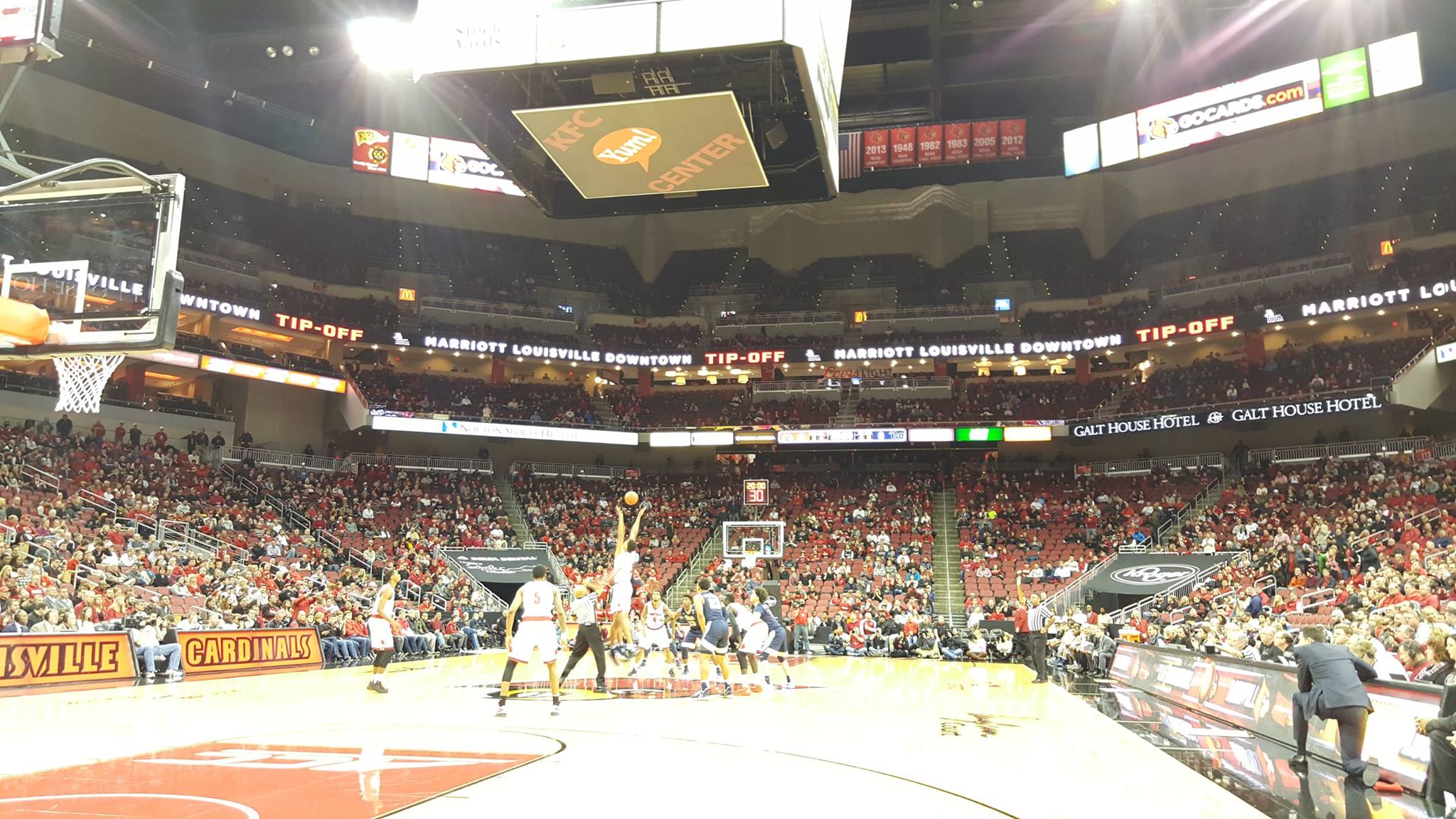 My first observation is that the crowd in Louisville was rather subdued... and definitely not at capacity. There are several reasons for this. It was cold, it was a 9 PM start, Louisville fans are disgusted with the scandals/have scandal fatigue, and everyone knew Louisville was going to win this game easily. Usually these games are high-excitement marquis games... this was not one of them. 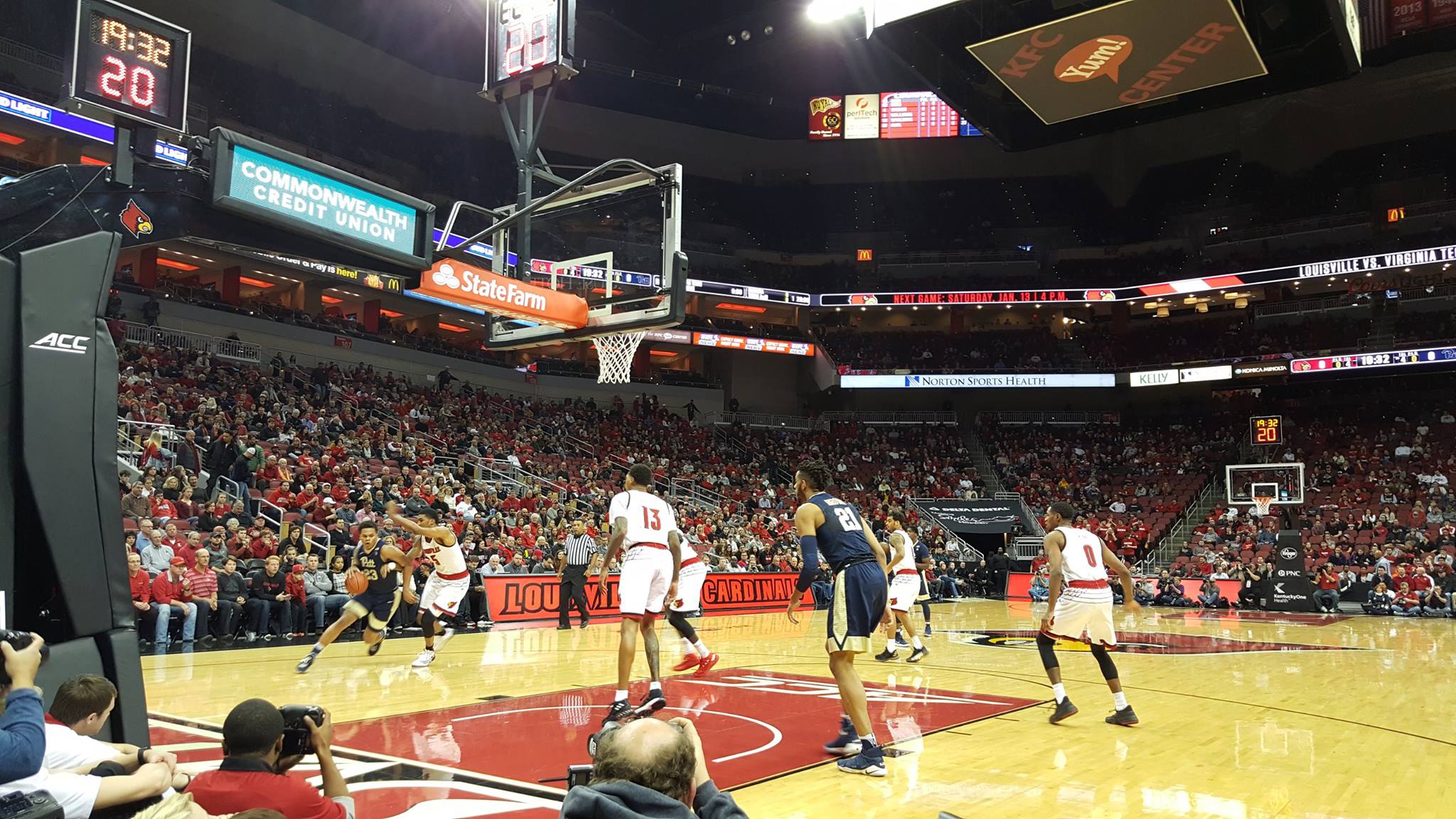 Shamiel gets us off to a good start

The game started well. We were aggressive and drove to the basket. I was struck by how broad Shamiel Stevenson was. I am very impressed with him- particularly as a freshman. He reminds me a little of Chevy Troutman. If he focuses on doing the little things, he can be a winning player. 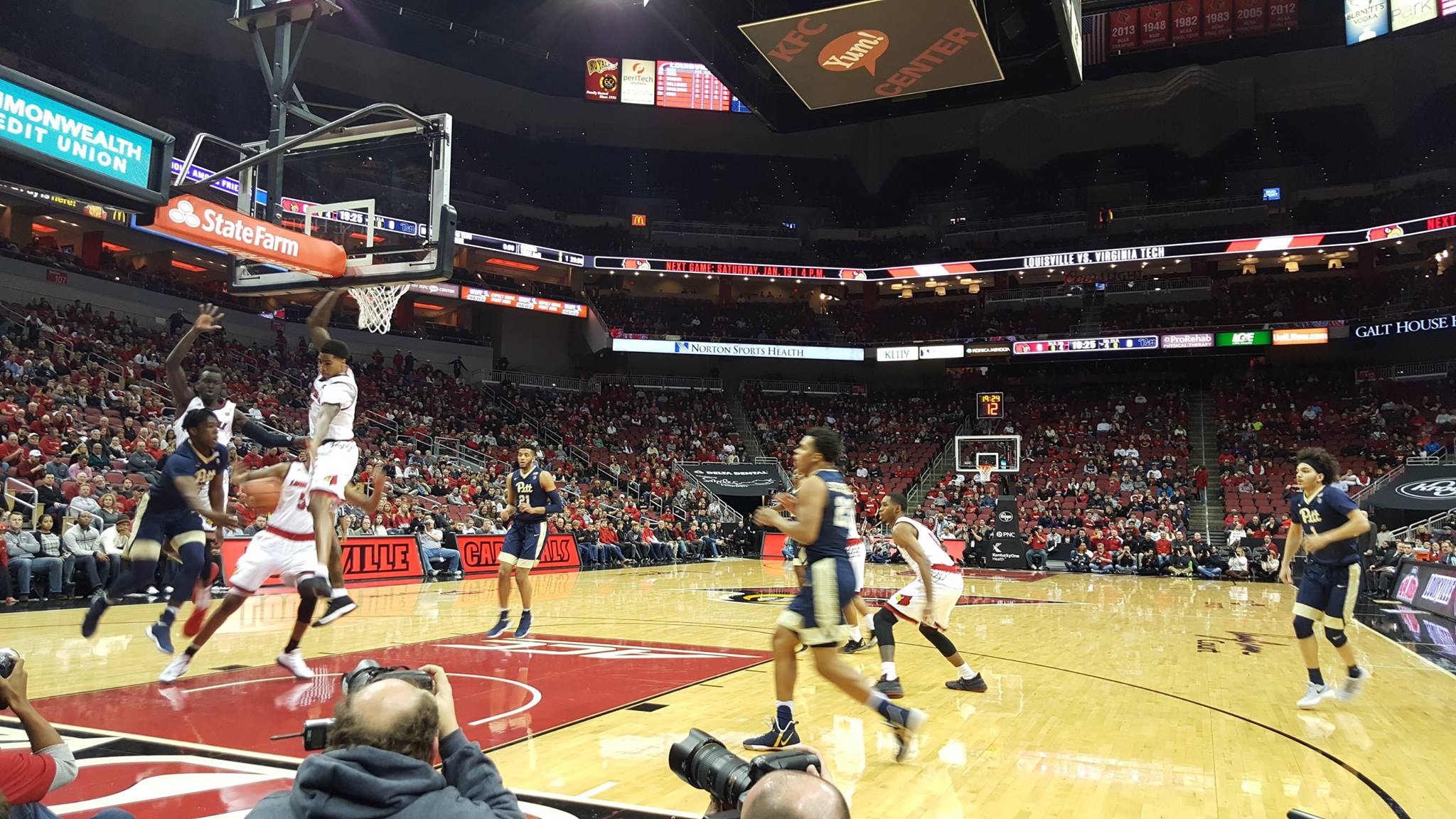 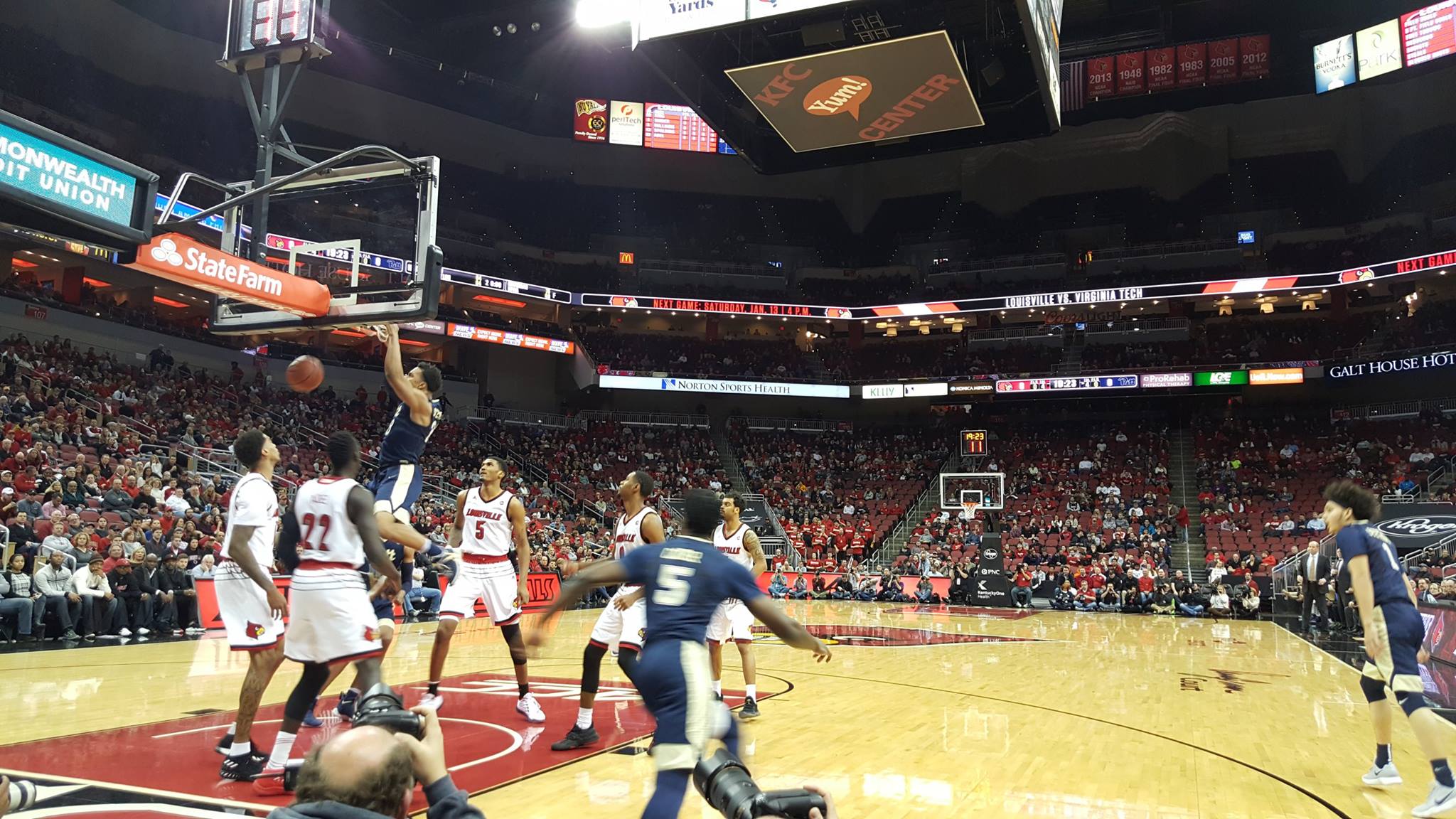 Marcus Carr impressed me as well. We had a couple of shots that were blocked or altered and the players seemed to stop attacking after that. Marcus continued to show no fear. Sometimes your shot gets blocked. You continue to attack and be aggressive. I don't think he is an NBA prospect, but he will have a nice career making money overseas. And maybe he will prove me wrong. 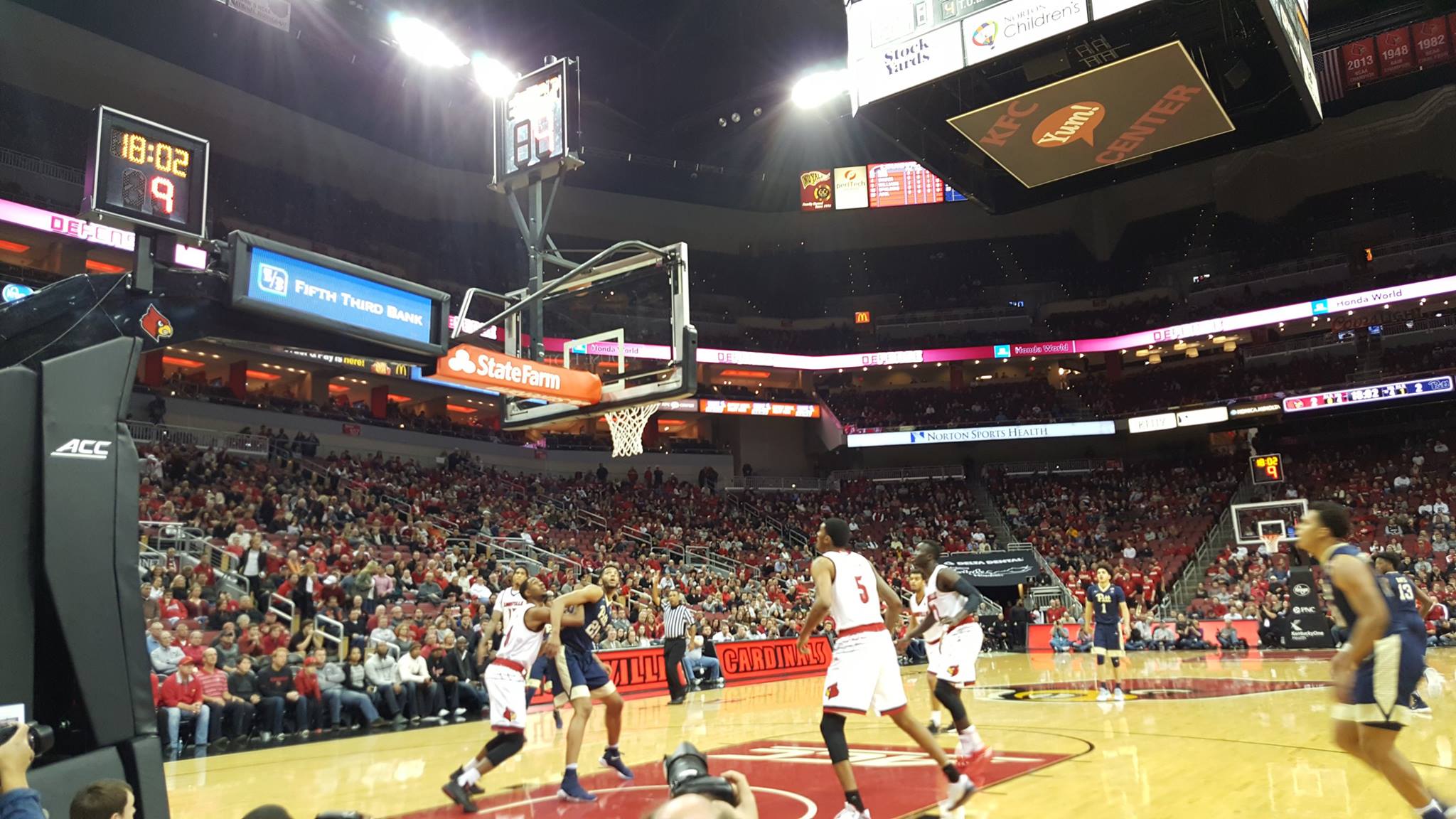 Terrell Brown didn't impress me... but it is not his fault. He is a freshman forward having to go against much bigger stronger players. He ended up with 18 minutes 0 points 2 rebounds 0 assists and 4 fouls. If we can move him to the 4 and get him more physically ready, he may be an asset rather than a liability. 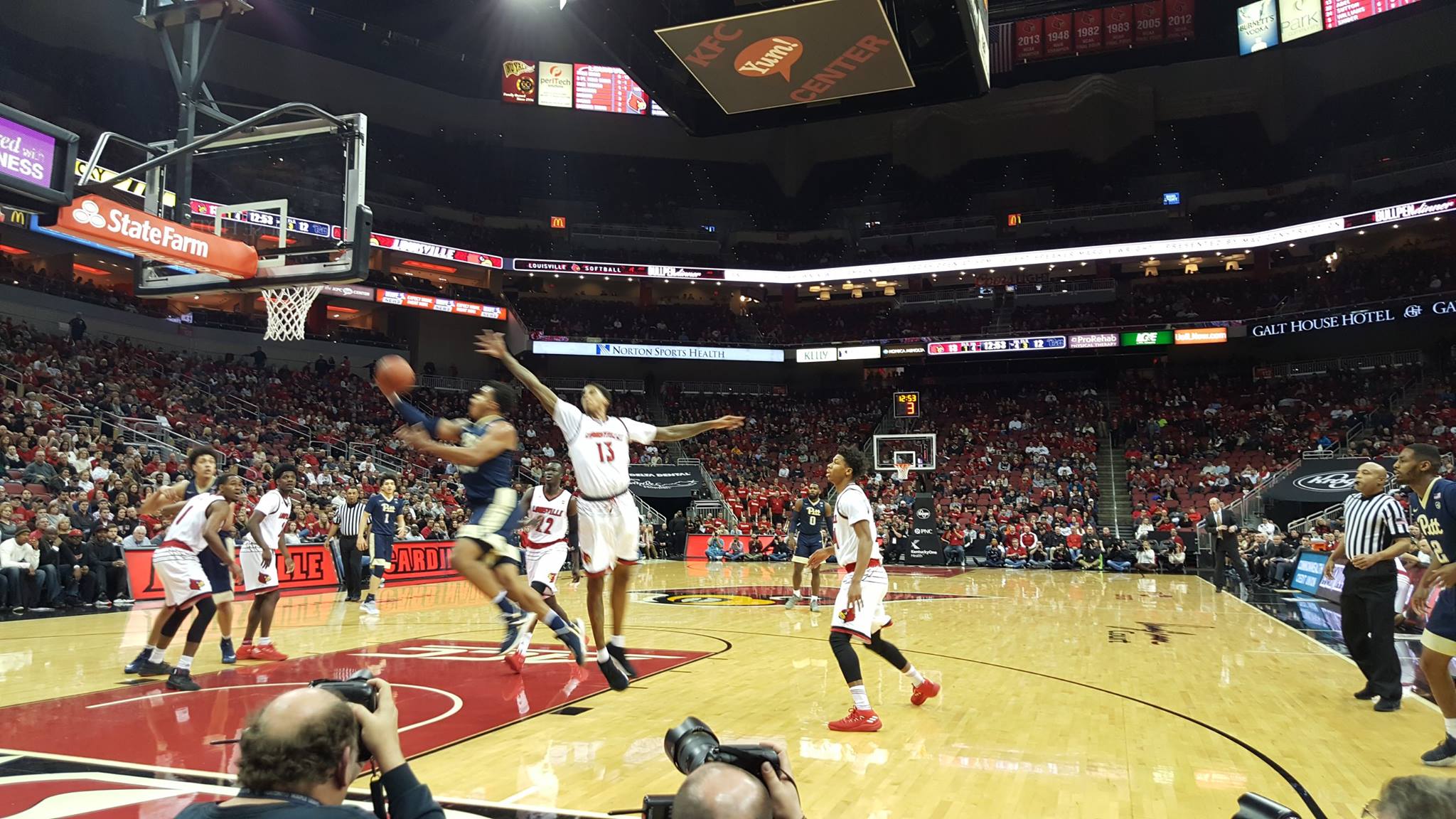 Shamiel was so fast, he was blurry.

I will come back to this photo later with more commentary. 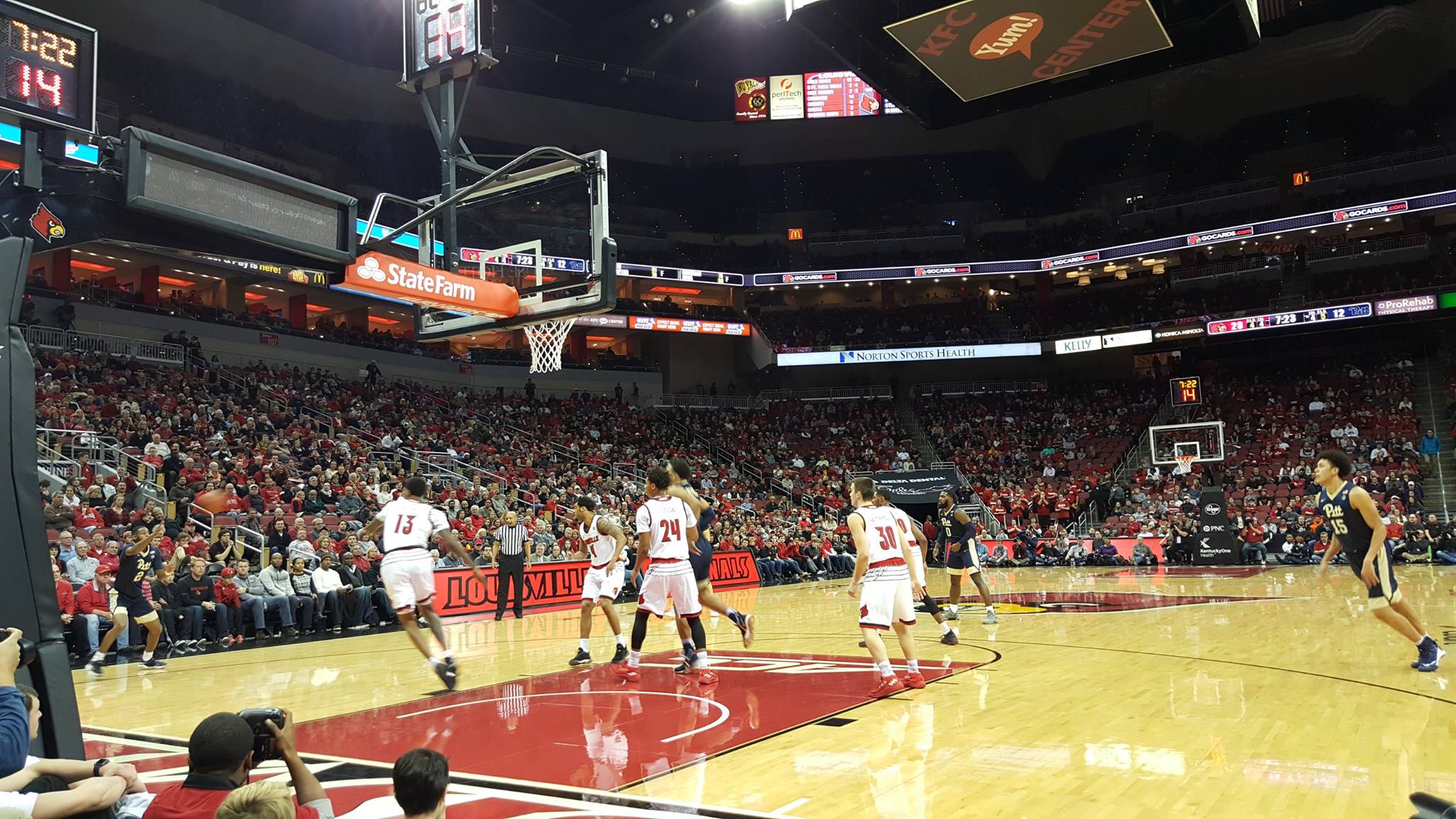 You have to be ready to shoot 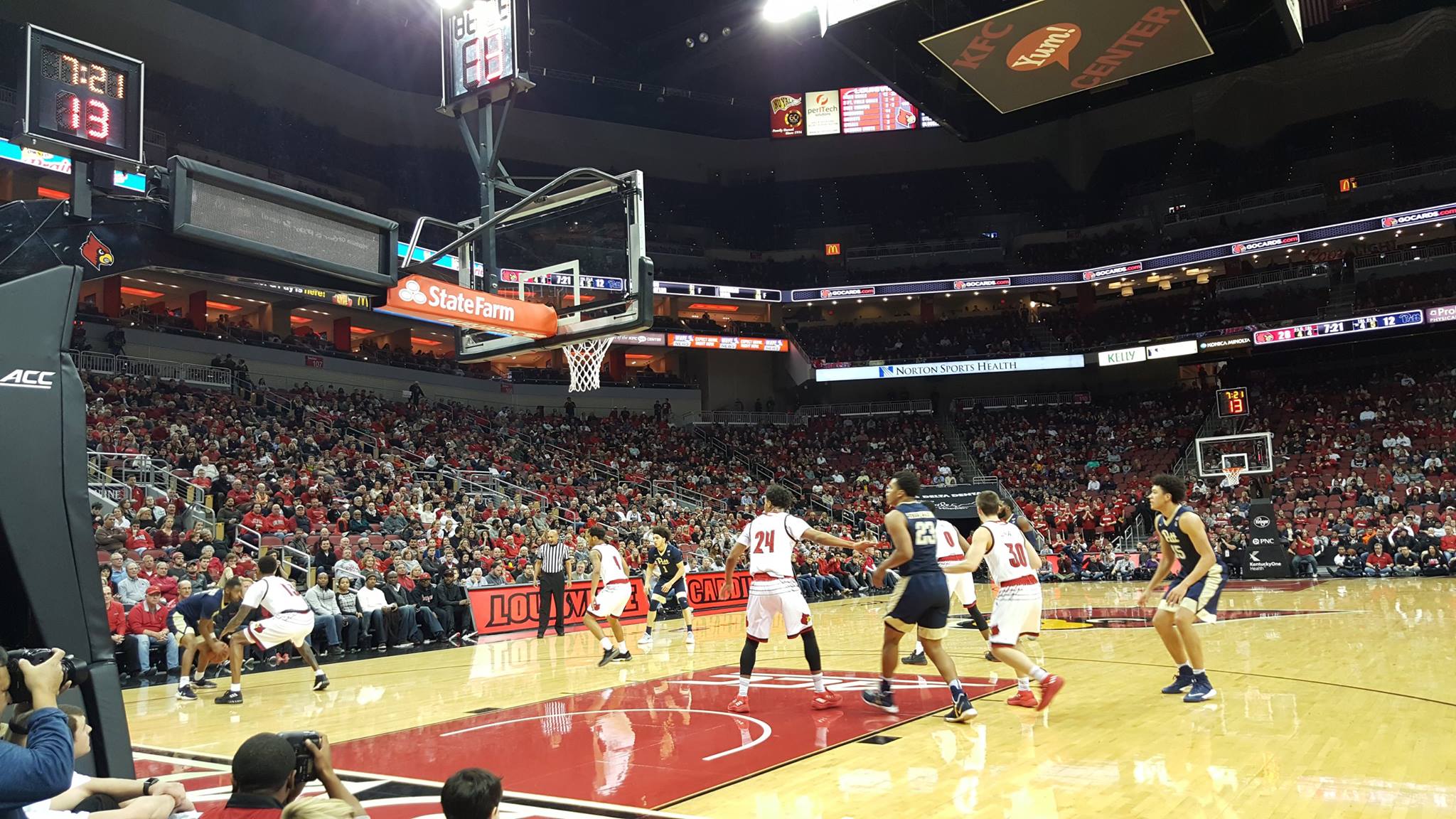 Otherwise the defense can react

Jonathan Milligan ended up playing 18 minutes with 4 points, 2 assists, 1 rebound, and 2 turnovers. Overall, underwhelming numbers. He was one of the players who seemed rattled by Louisville's size and rather than take the shot immediately, ended up trying to dribble for a second and then jacking up a bad shot. Maybe next year we will learn how to take shots when guys are in rebounding position. Otherwise a bad three over a 6'11 player with no one in rebounding position is basically just a turnover. 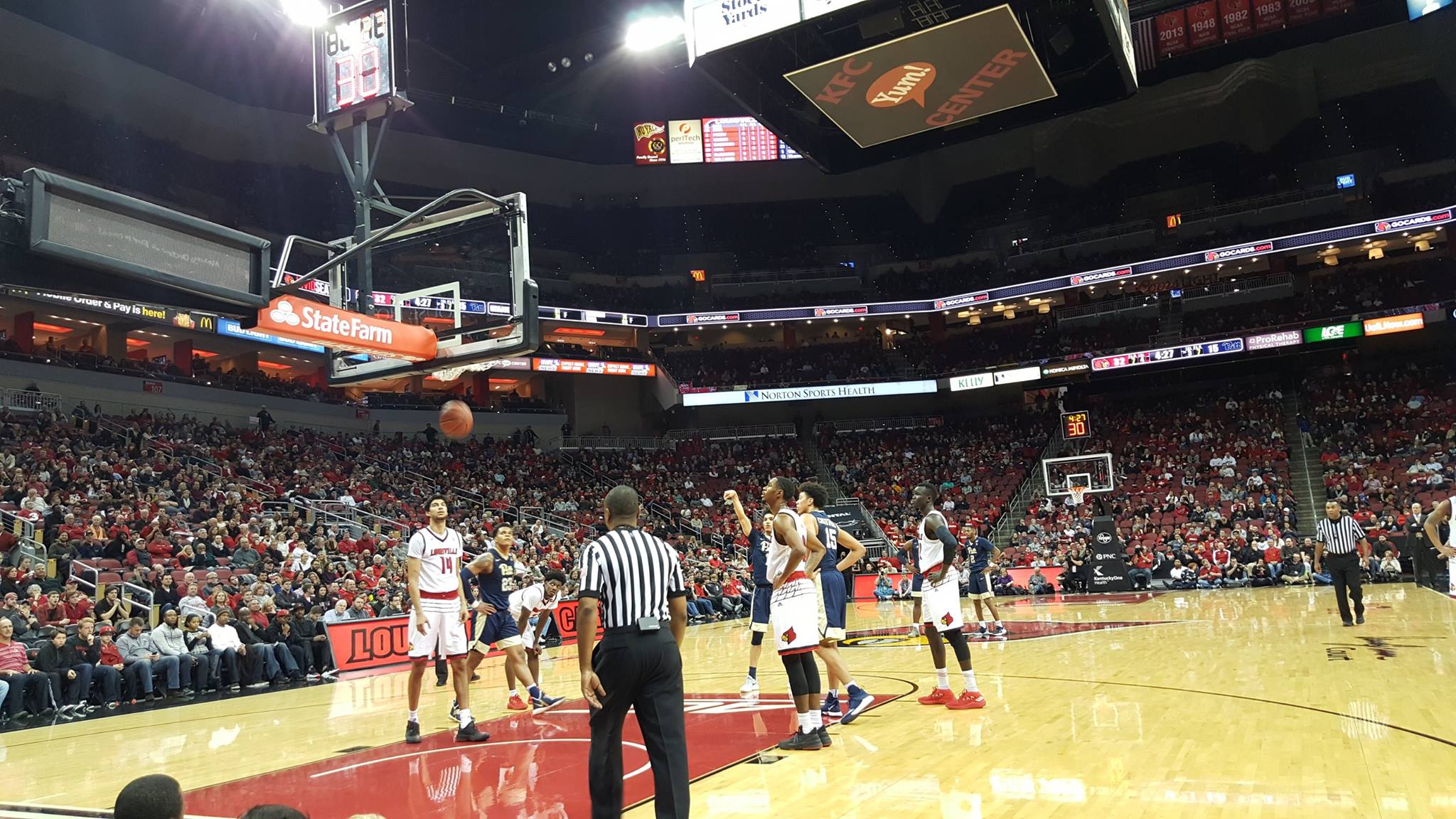 This was a rarity

So, at this point the game is pretty much over. Two things I want to mention here though. 1- I really like Parker Stewart. I think he can help stretch defenses, be aggressive when needed, and he was actually tied for the team lead in rebounds with 6. 2- Coach Stallings mentioned after the game that our problem was missing shots around the basket. This makes me question if he was actually watching the game. We shot 34.7% from the field for the game. But we were 11-24 from 2, and it wasn't until the last 2 minutes that we were under 50% from two. Our problem wasn't missing easy two pointers... our problem was literally everything else. 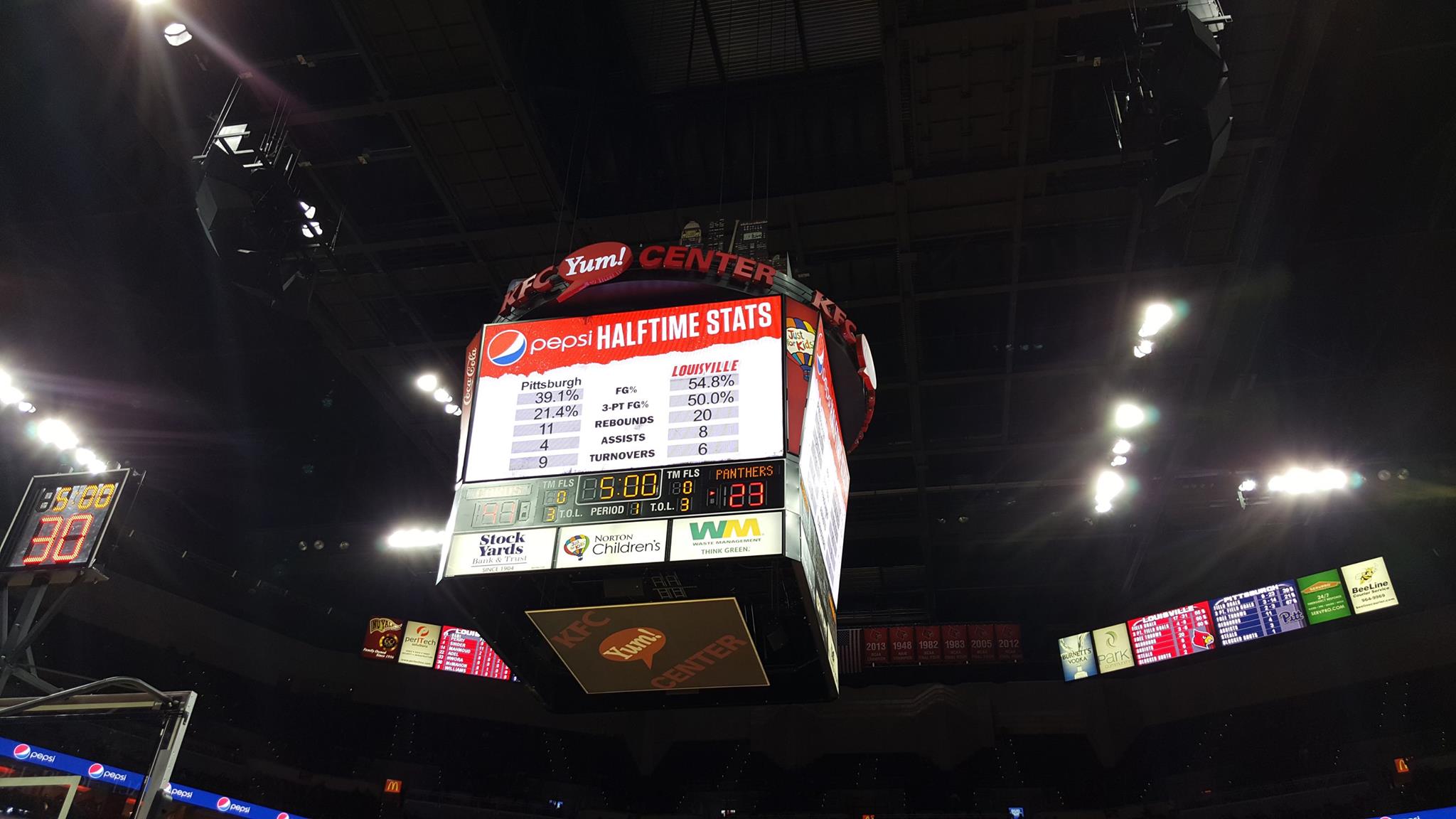 The halftime stats say it all. 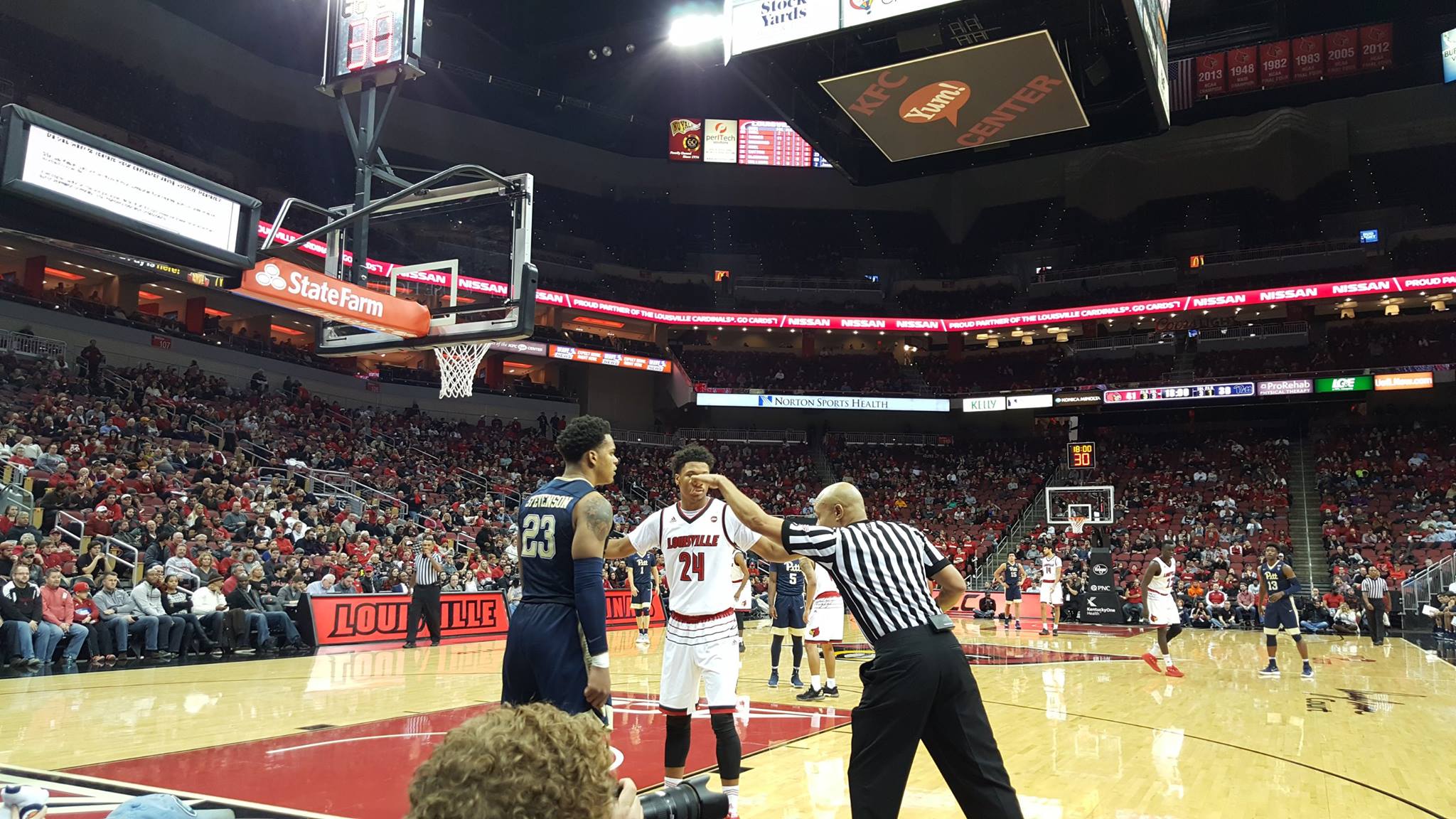 You have to be this tall to play in the ACC

Sorry, had to go for a little bit of levity. Back to the game. 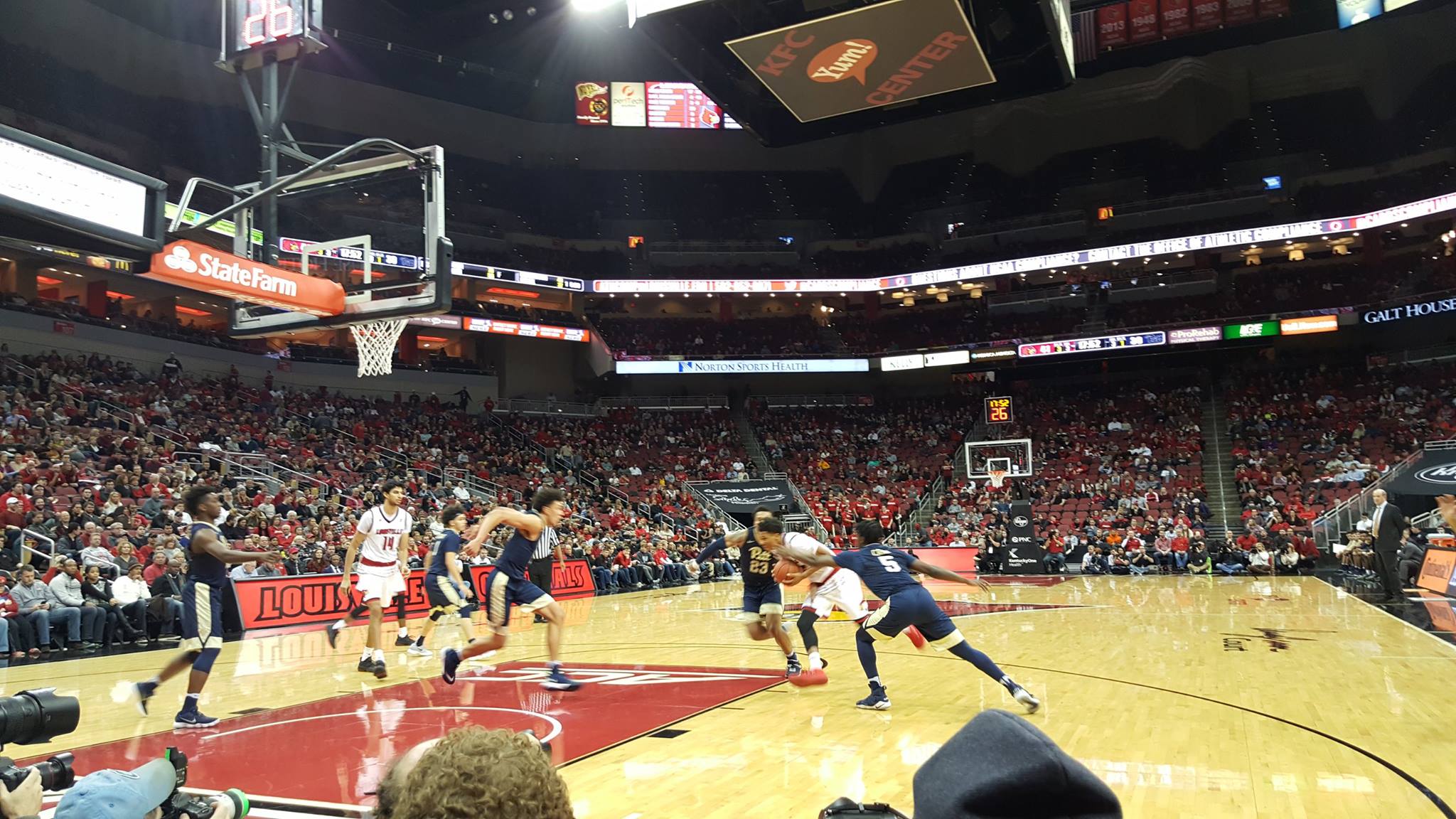 So... why was Louisville able to shoot 50% for the game? Well when one guy can cause 4 defenders to collapse on him... there may be an open player somewhere. 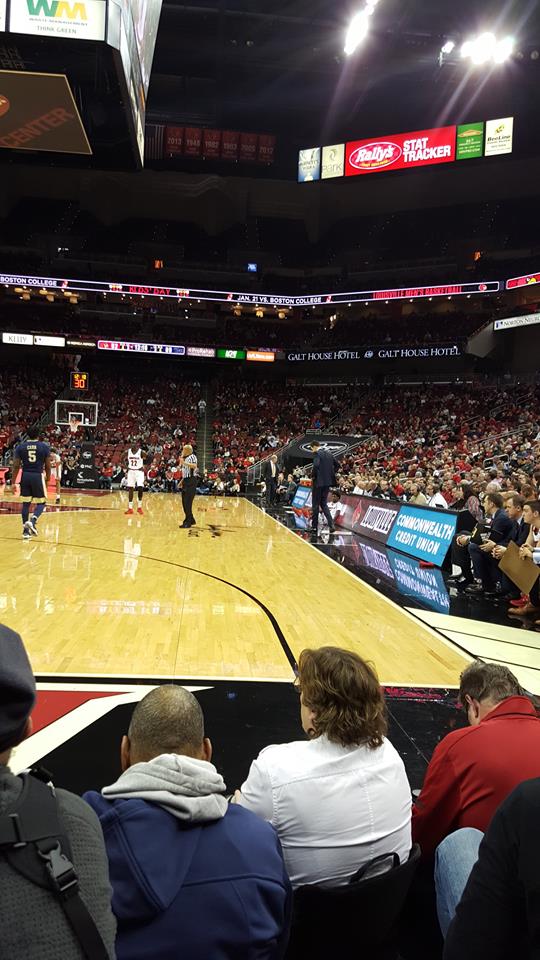 Is this when he was making a fool of himself?

So, a lot has been said about Stallings and his interaction with the fans. It appears that the Pitt fan in the Dorsett jersey has been identified and it was not him, but a UK fan who was insulting Stallings (not the Pitt team) that caused Stallings reaction. Why is that important? Well Stallings claimed it was him defending his team that caused his outburst. Basically, it sounds like he lied to make himself sound better. There are always three sides to the story- each party's side, and the truth. We may never know the truth, but I have not heard anyone come forward and say that Stallings was acting appropriately to some jerk fan. 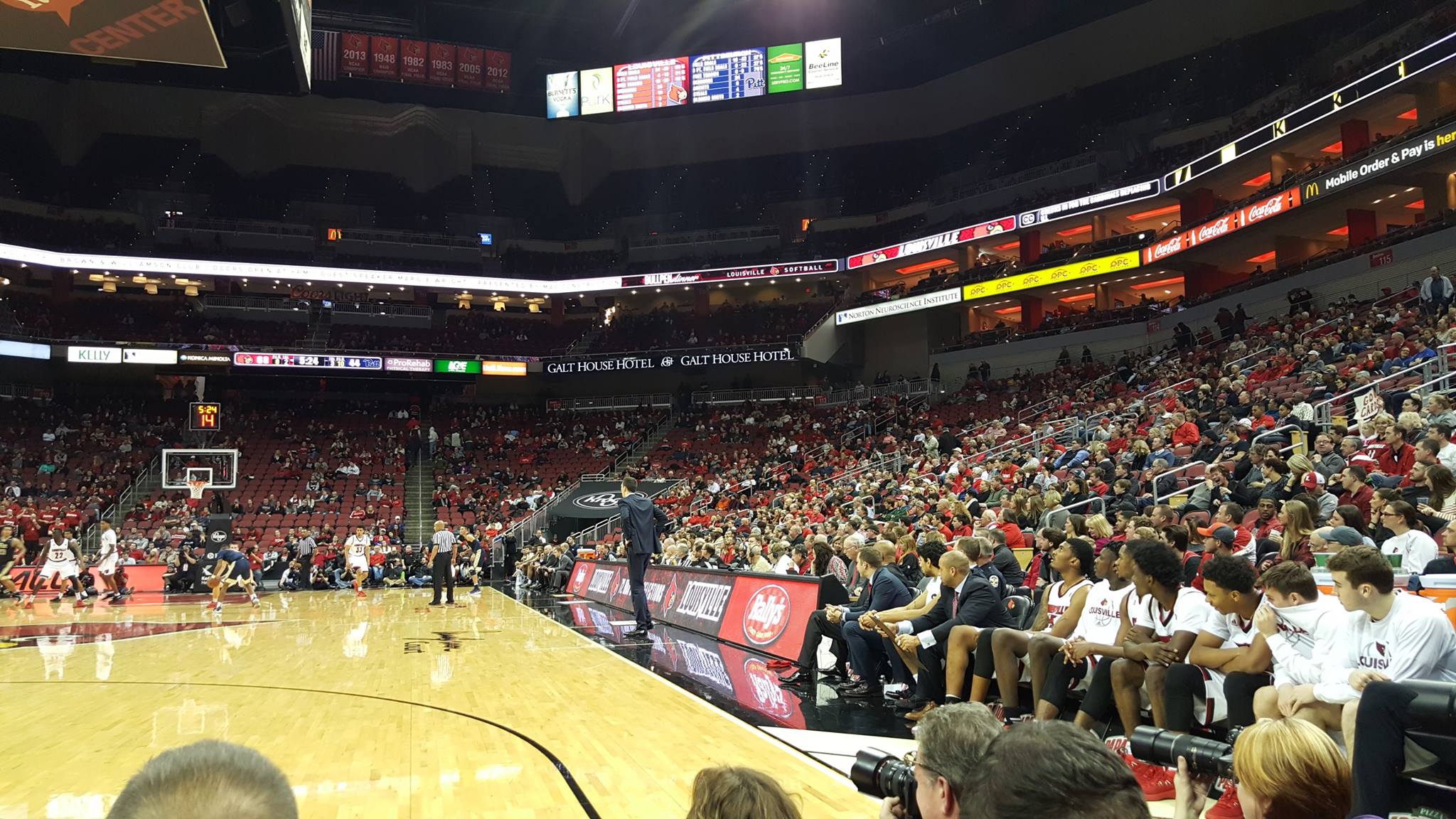 I noticed that for most of the second half, Stallings appeared to be seated. I took about 100 photos from the game, and only in about 6 is he standing. I haven't paid much attention to this before, but while Coach Padgett is standing and coaching his players throughout the game, Stallings seemed more subdued. Maybe it was because he doesn't normally stand during games? Maybe it was because the crowd had mostly filed out and he could call plays while sitting and still be heard? Maybe he had thrown in the towel? 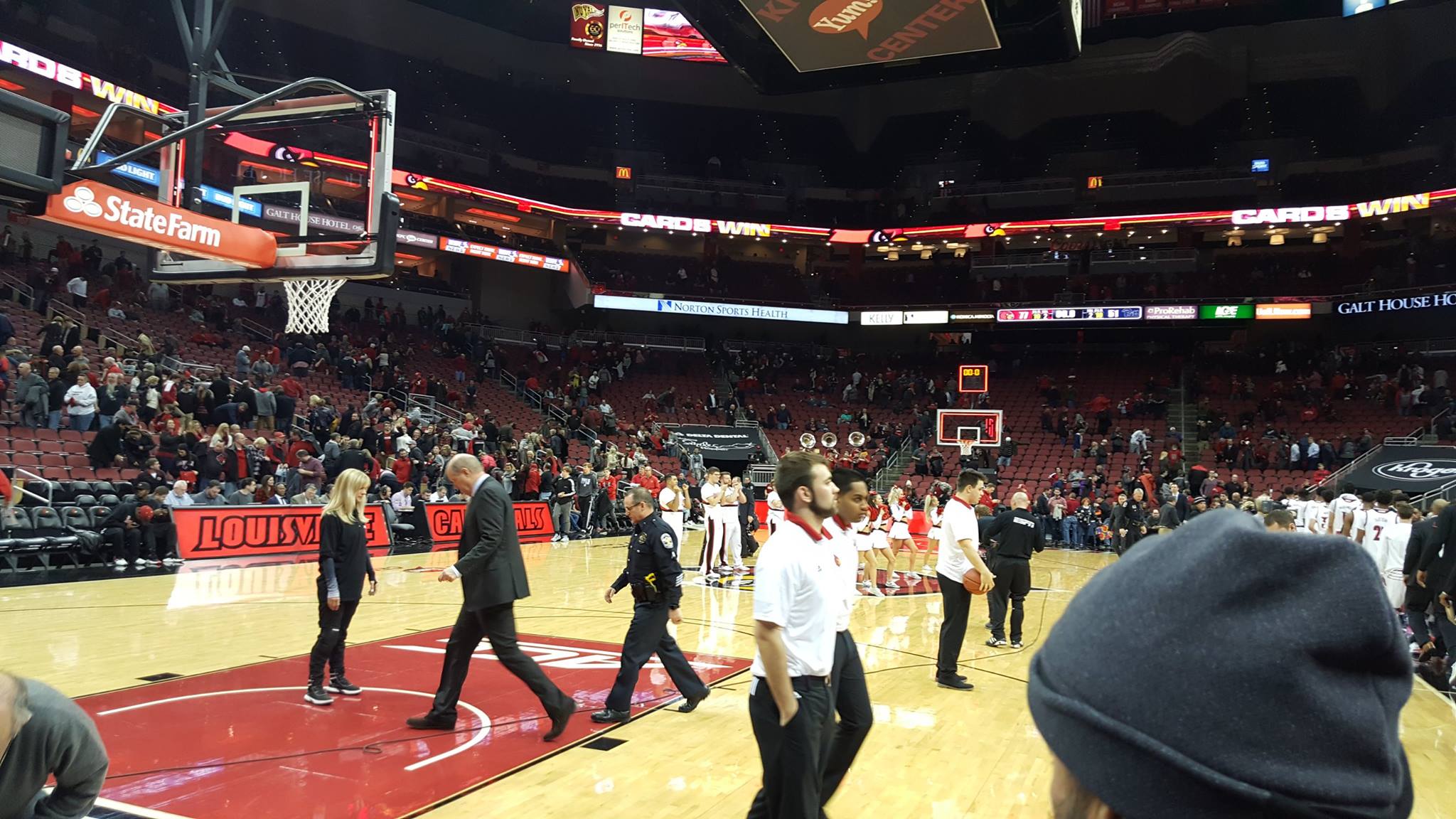 When the going gets tough... the tough hang their head.

Unfortunately, we weren't able to pull off the upset. What did I take away from this game?

I didn't mention Wilson-Frame, but I am extremely disappointed in his game. He is a black hole in the offense (once the ball goes to him, it doesn't leave) and isn't as big as I envisioned him. He is thick and could be a better rebounder than what he showed yesterday. 2-13 from the field isn't bringing something to the table- it's taking things off the table. If you are going to shoot that poorly, you need to do other things, and as I alluded to, 3 rebounds in 24 minutes is not enough. 0 assists is pathetic. I know the old saying is that you don't pass your way out of JuCo... but he has to learn quickly that he isn't in junior college anymore.

We do have many very good pieces however. Parker Stewart and Marcus Carr are going to both be very good college players and will give us an advantage in most games. Their defense needs work though. Shamiel Stevenson is going to be a very good presence underneath. He might not be as athletic as I anticipated him being prior to the season, but he will be fine. I think some people tried to argue before the season started that Peace Ilegomah should not be red-shirted. Those people should publicly apologize. 3 fouls in 2 minutes and he is not able to contribute anything at this point. I think he can develop... but it isn't going to be because of playing in games this year. He needs to live in the video room watching film and then practicing against people who know how to play. Same thing with Chukwuka. He was at least able to log 17 minutes before fouling out. I think both can become good players... but this is going to be a wasted year for them. Maybe both can redshirt next year?

I mentioned earlier I would come back to the photo. Our offense looked pathetic. It was basically pass the ball around the perimeter and then jack up a three- some more contested than others- but almost all of them Louisville or any other team would be glad to give up. If you have a frigid cold shooter taking a three, that's fine. Pitt had success when they attacked. Stevenson and Carr in particular. I'd like to see them continue to do that and once the defense starts to sag, then let Stewart and Wilson-Frame and Carr shoot threes. We were outrebounded by 13. Yes, Louisville is much taller than us. Luther would have helped, but he isn't Shaq. We took 25 threes, so we only shot 18 free throws- and I believe most of them care in the last few minutes of the game, when it was already over. We shot well from 2, we did well when we were aggressive... but the Kevin Stallings system is take threes and hope for the best. The future isn't necessarily doom and gloom... but we do need a coach that will put our players in a position to succeed, more size underneath, more experience and cohesiveness defensively, and a partridge in a pear tree.