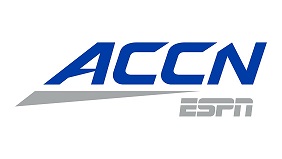 "The ACC Network will launch on Thursday, Aug. 22, 2019, ESPN and the Atlantic Coast Conference announced today. Just one week later, on August 29, the first conference football game will kick off on the new all-ACC platform when Georgia Tech visits Clemson for a Thursday night contest."

"ESPN will debut an ACC Network-dedicated :30 spot during its primetime coverage of the Dr Pepper ACC Football Championship, Saturday, Dec. 1, at 8 p.m. ET on ABC. In addition, ESPN will deploy new campaign assets complementing the spot to promote the forthcoming network. Fans interested in learning more about ACC Network can visit www.GetACCN.com."

According to the release, the ACC Network will show "40 regular-season football games, 150 men’s and women’s basketball games, and 200 other regular-season competitions and tournament games from across the conference’s 27 sponsored sports will be televised annually, plus a complement of news and information shows and original programming."