Pitt Football Recruiting: A deeper look at Pitt's recruiting trends, as well as those of Penn State and West Virginia

Share All sharing options for: Pitt Football Recruiting: A deeper look at Pitt's recruiting trends, as well as those of Penn State and West Virginia

A site called Mode Analytics recently had an interesting look at where college football players come from (info from ESPN). In addition to the overall picture, you can even break it out by school. Just really interesting stuff. 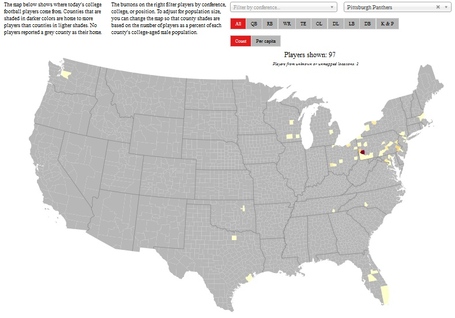 As one would expect, Pitt's talent of the current team has largely come from Pennsylvania, where more than half of the team's players are from. Breaking it down a bit more, 1/3 of the team is from Allegheny County. The next most fertile ground for Pitt players is Ohio and other areas such as DC, New York, and New Jersey have played a part in the makeup of the current team as well. Florida is still producing some ties for Pitt as well as five players are listed from there. Texas and Wisconsin have a few recruits from the Todd Graham and Paul Chryst ties and there are a few other states as contributors as well.

Taking things a step further, I thought it would be noteworthy to look at Pitt 'rivals', if you will - Penn State and West Virginia (yeah, I'm aware they're not playing against each other right now - just go with it). 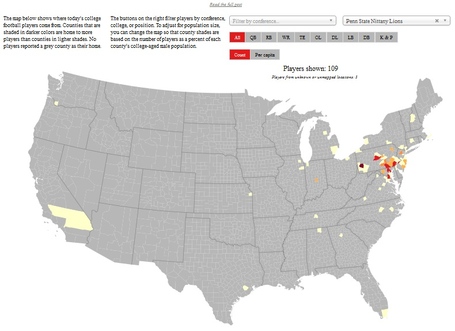 In the case of the Nittany Lions, they rely on Pennsylvania just as much as Pitt does, obviously. About half of their kids come from within the state. A few things to point out, too. For one thing, they have a bigger reach than Pitt, going into more parts of Pennsylvania as well as many more states and pulling kids out of there. On the other hand, you'll notice that one key area is missing from their profile - Ohio. The Nittany Lions have only a single kid from there and when you consider the pull of Ohio State and Michigan, that's not terribly surprising. Pitt has more success in going into Ohio, but there are a lot of factors going into that. They're closer and family can more easily come see them play. Plus, some kids that don't want to play in the B1G may look at Pitt as another alternative. 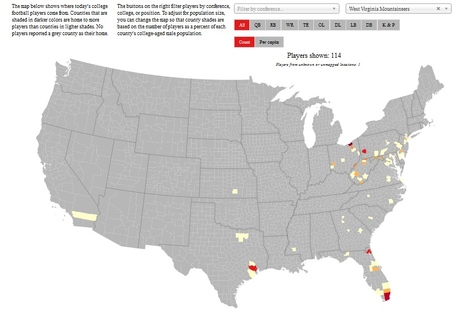 The first thing that jumps out right away is that in a smaller state, they're forced to look outside of their own area a bit more. Pitt and Penn State both have it good in that a lot of their recruiting can be done locally in Pennsylvania. As I said, those schools have pulled in about half of their players in the state (an interesting sidebar, too, is that Pitt has no kids from West Virginia at all, according to the graphic). West Virginia, though, got only less than 1/5 from within their own state.

The Mountaineers have instead relied upon neighboring states such as Pennsylvania and Ohio for their players, but also are dipping down into Florida quite a bit as well. In fact, the funny thing to me is that, for as much as Pitt fans angst over West Virginia coming into Pennsylvania, their team actually includes more players from Florida. The Mountaineers have a good reputation down there and have been hitting that area more than you might think. Heck, WVU even has more success going into Ohio and they've snagged considerably more kids there than they have in Pennsylvania. And with Dana Holgorsen aboard as well as their new Big 12 home, Texas and Oklahoma show up as well.

Bottom line is that while West Virginia is getting some kids in Pennsylvania, it's really not as many as most people tend to think.

Finally, one other point I found too intriguing to pass up. If you look at the three maps, what's the one thing you notice? To me, it's the disparity of color.

Penn State and West Virginia both have more colorful maps, indicating they've got more talent in certain pools than Pitt has. Pitt's map looks rather banal, mostly due to their sheer dependence on Allegheny County. Instead of grabbing 4-5 kids in other counties, the school relies upon the most local of talent to stick around. That's something we all knew, but to see it on a map in such black and white terms drives the point home even more.

It's all simple for Pitt, really. Paul Chryst and staff won't get every top player in western Pennsylvania to come here, but they've got to fend off Penn State and West Virginia as much as they can. Those schools both offer more rural campuses and the opportunity to play different conference foes. Because of that (and kids' willingness to want to move away from home), Pitt simply can't keep everyone home - there are always going to be players that want to leave, no matter how good the program is. But what the Panthers can do is continue looking outside a bit more, as they've done this year in bringing in recruits for the 2014 class from all over.

Pitt's map, by nature, is going to look less 'colorful' than that of Penn State and West Virginia simply because of the abundance of local talent. But as kids look around more and choose other options, Pitt would probably be well served by investing a bit more in places like Maryland, New Jersey, Delaware, and even Florida. You can't recruit everywhere, but branching out a little more might pay dividends for the Panthers in the long run.