Share All sharing options for: A look at Pitt basketball recruiting trends

Last week, I took a look at some recruiting trends for the football program, as well as those of 'rival' Penn State and West Virginia. Mode Analytics did it again and this time, we've got a map of the basketball trends for Pitt's program. I'm not going to write nearly as much for this, but I did want to share it as well as a few thoughts: 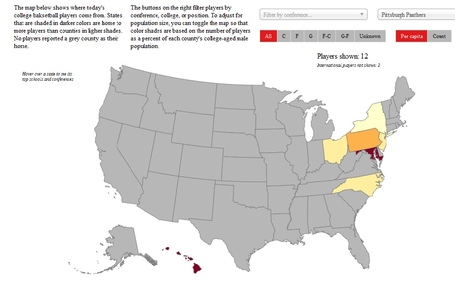 A few things stand out in terms of the map. Obviously, Jamie Dixon and company don't rely nearly as much on Pennsylvania as the football program does since there's just not as much hoops talent out in western Pennsylvania. You might remember that Paul Chryst's team was made up of about 2/3 Pennsylvania players. Dixon, meanwhile, has only about 1/5 of his players from within the state (three of 14). That said, Pennsylvania and Maryland (4) are the two states Dixon has relied on the most for the current team.

Other states Pitt has went to include Ohio (1), New York (1), New Jersey (1), North Carolina (1), and Hawaii (1). In addition to those, Dixon has also dipped into the international pool for two players (Mode Analytics counted Zanna as international even though you could put him under Maryland, as well as Joseph Uchebo). I'd be interested to know how Dixon stacks up against other coaches when it comes to recruiting international players since it always seems he has a few on the team.

One thing that will be interesting to track is if Pitt gets more active in the NY/NJ area with Barry Rohrssen coming back on board. Pitt currently has two players from there, but one (Derrick Randall) was a Rutgers transfer (the other is Chris Jones). The other obvious areas for expansion are the Carolina/southern ACC states. Pitt went to North Carolina to land Josh Newkirk and it only makes sense to see them go down there a bit more.

When you look at those two areas (NY/NJ and Carolinas/southern ACC), it's easy to see that something would have to be given up if Pitt starts branching out there. It could mean Pitt goes after fewer PA/MD players, but this is a little different than football. We're not talking about dozens of players here, we're talking about one dozen. You just can't miss as much on players as you can in football. As a result, I think it's less about geography here and more about finding actual talent - wherever it may be.

Pitt has a good thing going with a bit of a Maryland pipeline and that's one area I think they want to continue to go. But that said, in the end, Dixon will go where the talent is.