Share All sharing options for: Breakdown of Pitt Football Attendance (Part I)

Today, we've got a guest host for an article that really intrigues me. Some of you may know HokieMark from his ACC blog, ACCFootballRx. I link to his blog on occasion and he does some good work there - be sure to check them out.

As part of a post, he analyzed some football attendances for some of the new ACC schools, including Pitt. I thought it would be beneficial to have him write up his analysis here in a two-part series.

When I was analyzing attendance trends for ACC teams, I noticed something peculiar about Pittsburgh home attendance - it's unusually erratic from year to year (see figure 1). Despite playing in a 65,500-seat stadium, most years the Panthers average between 40 and 50 thousand fans. Pitt attendance rarely exceeds 50,000 (by my count it's happened 36 times in the last 24 years). Yet one year, not that long ago, Pitt broke 60,000 four times and averaged nearly 60,000 for the season. That year was 2003. 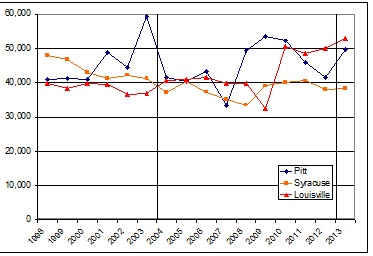 You may recall that 2003 was the final year for Miami and Virginia Tech in the Big East. Coincidence, or was there something else at work? I needed to know, so I dug down deeper.

Could it be the opponent? That's often the first thing fans bring up: i.e. "Our schedule stinks, that's why our attendance is down." Certainly that is a factor, but is that all we need to know? To find out, here's a chart showing average attendance for each opponent. 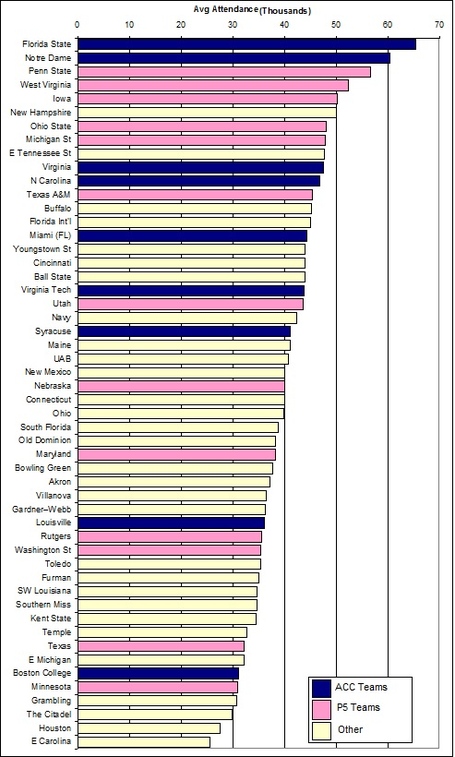 I've split out three kinds of opponents: ACC teams, P5 (Big Ten, Big XII, Pac-12 and SEC) teams, and others. Florida State, which hadn't been to Pittsburgh since 1983, has only one data point since 1990, but it's a big one. I don't think anyone is surprised that the #2 biggest draw has been Notre Dame, followed by Penn State and West Virginia.

Iowa is a little surprising in the #5 spot, then an absolute shocker at #6 - New Hampshire. Raise your hand if you ever thought "I sure would like to see Pittsburgh play New Hampshire more often". Yeah, didn't think so.

Ohio State and Michigan State make sense, but then there's E. Tennessee St. sitting in the #9 spot. What's going on, Panther fans? Obviously, attendance at Pitt football games is about more than just the opponent.

The next thing I wanted to check was the stadium. Pitt actually played in 3 different stadiums between 1990 and 2013. What effect did that have? Was stadium capacity limits also a factor? Is playing off-campus a big deal?

There's a lot in this little table. First of all, Pitt has never really bumped up against the capacity of the stadium for an entire season (though 2003 would've been a problem in the 2 older stadiums). Also, it's really hard to point the finger at the move off-campus when the highest average here was in Three Rivers Stadium! Still, Heinz has the biggest capacity but the smallest average.

There must be something else, which we'll look for in Part 2 tomorrow.