Share All sharing options for: Pitt Lands Four, Ejuan Price On the Way?

Todd Graham's 2012 recruiting class got off to a pretty slow start, but now the wheels seem to be greased and the commitments are rolling in.  Between Friday and Saturday, the Panthers picked up four verbal commitments for the class of 2012, and it looks like an even bigger fish could be on his way.

Three more verbals rolled in on Saturday.  The first was 6'3'' Clairton wide receiver Trenton Coles, adding another WPIAL player to Graham's first full-year class.  Coles is listed as a three-star recruit, but currently didn't have any other scholarship offers, according to Rivals.  Brandyn Cook, a 6'2'' 290 center, from St. Xavier (Cincinnati,OH) was the second player on Saturday to commit to Pitt.  He chose to come to Pittsburgh over offers from Miami (OH) and Youngstown State.  The recruiting extravaganza was capped off on Saturday with the commitment of cornerback William Parks.  6'2'' 180, Parks is from Germantown, Pennsylvania, and had offers from a handful of schools, including Connecticut, Buffalo, and Temple.

Of the bunch, I think Hilliard has the most potential, especially since he'll get even bigger once he gets to campus.  I was happy to see an offensive lineman in Cook, as well.  Dave Wannstedt was notorious for lacking in this area, so I'm glad to see Graham pick up a lineman already.  None of these guys are stars, but they look to be solid additions to a fledgling recruiting class.

More immediately, it looks like Pitt could be getting another late pick-up for this coming season, and this one is very highly regarded. 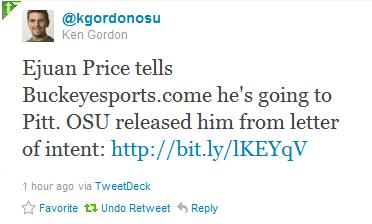